Everyone Can Be A Star!

Scientists have made a new discovery. Looking out across the Milky Way, they have discovered that stars contain these same elements which are present in human beings. How were they able to find this out? What tools did they use? Is it indeed true that we are all made of starstuff? Read on to find out!

Scientists have known for a long time that human beings are made up of six common elements. Carbon, Hydrogen, Nitrogen, Oxygen, Sulphur and Phosphorus (“CHNOPS”) make up 97% of the mass of our bodies. Each one plays an important role. Our lungs and brain use oxygen, and hydrogen combined with oxygen makes up the water in our bodies. Phosphorus is important to help build strong healthy bones and teeth. These six elements are essential to life and are called the building blocks of all life here on Earth. But are these same elements found in stars?

Since we are unable to travel to and land on a star, brilliant astronomers working on the Sloan Digital Sky Survey, have used a spectrograph to measure how much of each element a star may contain. A spectrograph is a tool that splits light from distant stars into detailed rainbows called spectra. Attaching the spectrograph to a large telescope, they are able to look out across hundreds of thousands of stars. The machine measures the depth of the dark and bright patches in the spectra,  showing how much of each element the star contains. 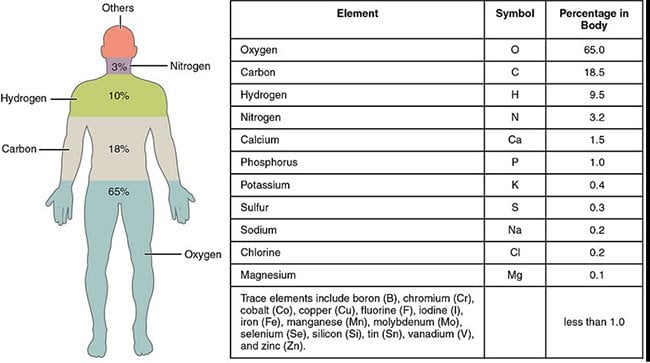 Which Stars in the Milky Way Galaxy are Older?

Although stars are mostly hydrogen, the spectrograph was able to detect the “CHNOPS” elements in the inner part of the Milky Way Galaxy. Astronomers know that the inner part is the older part of the galaxy. They will use this information and compare it to other Galaxy models. The original formation of the galaxy may be predicated by using tools such as models. It may even help them predict how future galaxies will form.

We now know that stars contain the same life building elements found here on earth and in our bodies. As the famous astronomer Carl Sagan said, “we are made of starstuff.” Our connection to the stars is made through similar elements. So when we look up at the stars at night, we can now say that “we too are stars.”