Epsilon Pegasi is also known as Enif from the Arabic word meaning ‘nose’, due to its position in the Pegasus constellation. Historically this star was referred to by other names in other cultures. Its traditional name is derived from Fom al Feras, which is Latinised to Os Equi. In the Asian culture this star is called Wei Su, meaning ‘Rooftop’ in reference to Pegasus.

Enif is located 690 light-years away in the constellation of Pegasus (the winged horse). This constellation is the seventh largest in size (out of the 88) and is home to a number of deep space objects as well as the famous “Great Square of Pegasus.” It also occupies about 1,121 square degrees in the night sky and belongs to the Perseus family of constellations.

This star can be seen in its home constellation located in the fourth quadrant of the Northern hemisphere, specifically between latitudes of +90 and -60 degrees. Because this star is so bright it can be seen with the unaided eye. The constellation of Pegasus is viewed upside down, so when searching for Enif look to the bottom of Pegasus. Epsilon Pegasi is the furthermost right hand star marking the muzzle of the horse. 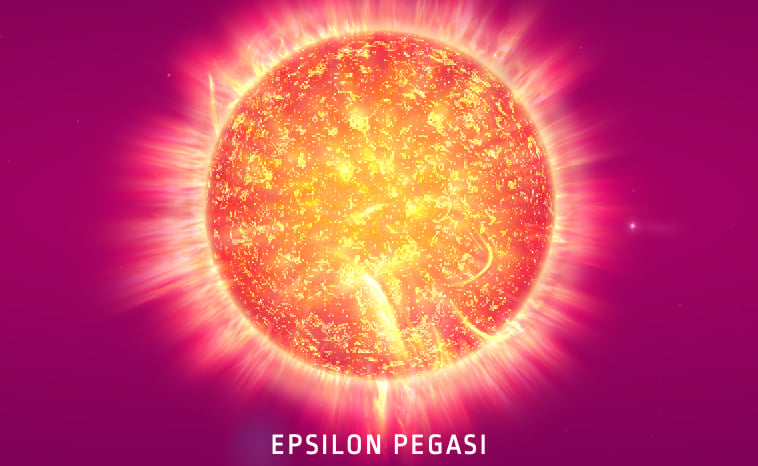 Enif is an orange supergiant with 12 times the Sun’s mass and 185 times its radius. Its spectrum shows signs of an overabundance of barium and strontium. Studies of this star also show that it may only have a few million years left in its life; however, astronomers are unsure if it will explode in a supernova or simply die off into a rare neon-oxygen white dwarf.

Enif shines with an apparent magnitude of 2.399 and is 12,250 times more luminous than the Sun. This star is also classified as a LC slow irregular variable showing changes in its magnitude from +0.7 to +3.5. In addition, Epsilon Pegasi has been emitting huge flares which are at times more luminous than the Sun. The outer envelope of this star is burning at an effective temperature of 4,337 Kelvins or 7,346 degrees Fahrenheit or 4,063 degrees Celsius, which is what gives this star its orange-hue.

Historically Epsilon Pegasi is was referred to by other names in other cultures. Its traditional name is derived from Fom al Feras, which is Latinised to Os Equi. In the Asian culture this star is called Wei Su, meaning “Rooftop” (in reference to the asterism in Pegasus). In mythology, Pegasus was the white, winged horse that sprang from the severed head of Medusa. It has been used in many cultures, stories and legends.

Epsilon Pegasi is not just another twinkling celestial object, it has some cold hard facts and true significance. So if you have a chance to view this fascinating star of “the nose” in the Pegasus constellation be sure to check it out.

Fly to Epsilon Pegasi in 3D!