Columba derives its name from Latin meaning, “the dove”; its original name was, Columba Noachi (“Noah’s dove”). It lies in the first quadrant of the Southern hemisphere and is located specifically between latitudes of +45° and -90°. Along with other constellations, Columba was first catalogued in the 2nd century by, Ptolemy, a Greek astronomer.

Columba is the 54th constellation in size, occupying only 270 square degrees. It is neighbors with Caelum, Canis Major, Lepus, Pictor and Puppis. In addition, this constellation has only four main stars and two deep space objects and no Messiers or meteor showers. 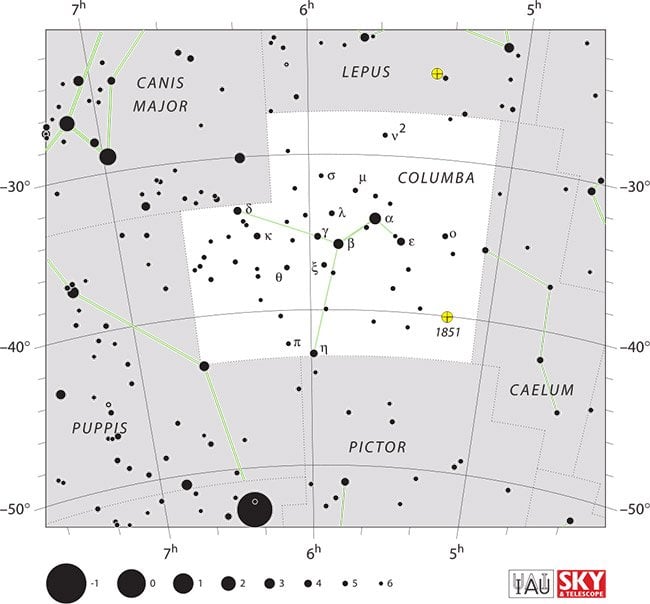 Columba has only two deep sky objects. Read on to discover some fascinating facts about these celestial wonders.

The constellation Columba contains seven main stars that makes up its shape. Let’s explore them further. 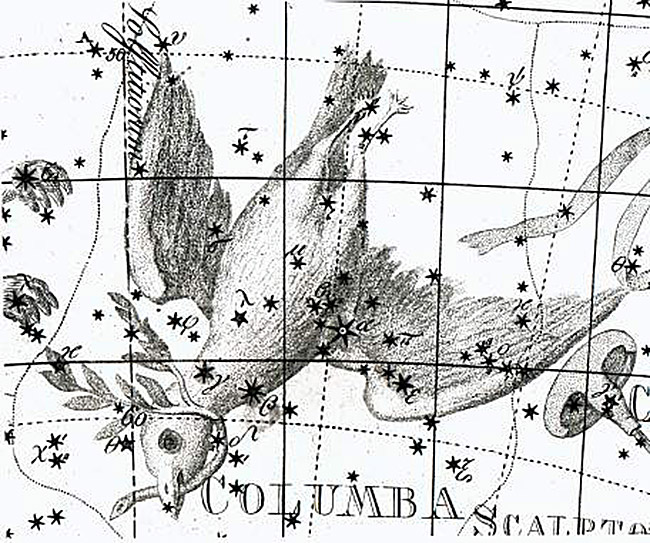 Columba with an olive branch in its beak as shown on Chart XVIII of the Uranographia of Johann Bode (1801).

Out of all the stars that make up the Columba constellation, none shine brighter than Phact (Alpha Columbae). This star is made up of a Be-type subgiant, a suspected Gamma Cassiopeiae type variable and a faint companion star. Columba’s name is derived from Arabic (Al-Fakhita) meaning “the dove or “ring dove.” It is also situated around 270 light-years from Earth.

This constellation is representative of the dove sent from Noah’s ark after the great flood. It returned holding an olive branch in its beak which signified dry land and the receding of the water.

Columba is also thought to, perhaps, represent the dove sent by the Argonauts to ensure their safe passage between the Clashing Rocks.

This constellation came to be by a Flemish astronomer and cartographer by the name of, Petrus Plancius. He created Columba from the stars located behind Argo Navis (constellation representing the Argonauts’ ship). In 1613 it was later split into many smaller constellations, where Plancius renamed Argo Navis, “Noah’s Ark.”

Columba is a fascinating constellation, so the next time you are gazing into the night sky, be sure to search out this intriguing figuration of stars.