Cetus is the sea monster in Greek mythology that had Andromeda left as a sacrifice for her mother’s vanity. It lies in the first quadrant of the Southern hemisphere and is located specifically between latitudes of +70° and -90°. Along with other constellations, Cetus was first catalogued in the 2nd century by, Ptolemy, a Greek astronomer.

Cetus is the fourth largest constellation in the night sky, occupying 1,231 square degrees. Cetus is also neighbors with Aquarius, Aries, Eridanus, Fornax, Pisces, Sculptor and Taurus. In addition, this constellation has four main stars and nine deep space objects, including one Messier and three meteor showers. 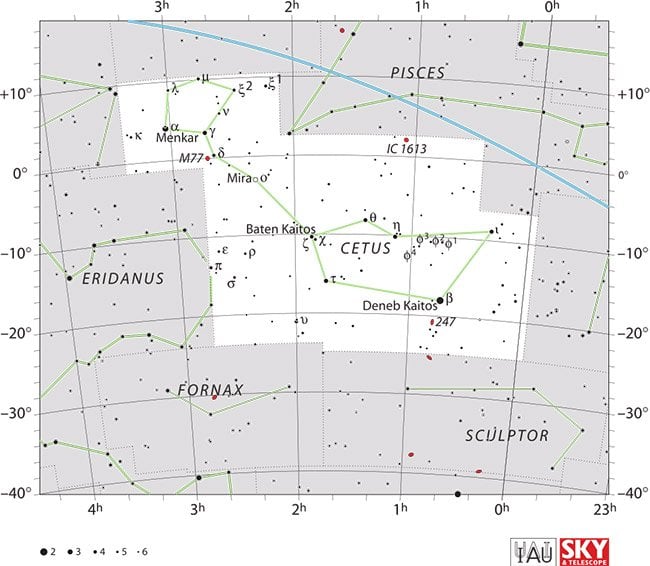 Cetus has nine deep sky objects. Read on to discover some fascinating facts about these celestial wonders.

The constellation Cetus contains four main stars that makes up its shape. Let’s explore them further. 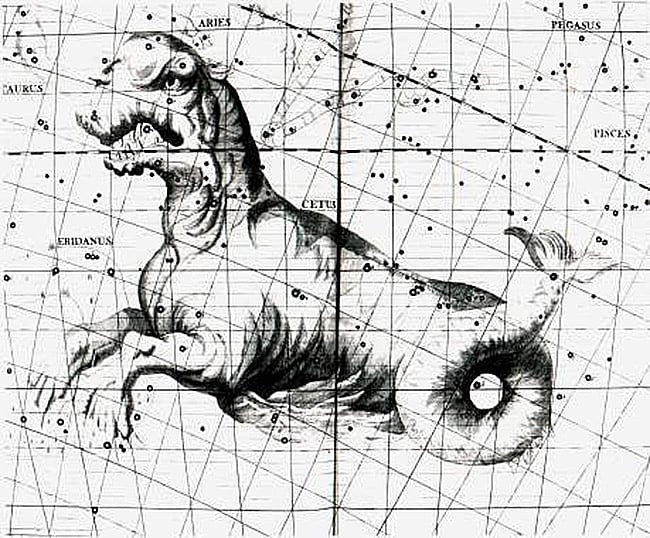 The bizarre-looking sea monster Cetus emerging from the ocean of the southern skies, illustrated in the Atlas Coelestis of John Flamsteed (1729).

Out of all the stars that make up the Cetus constellation, none shine brighter than Deneb Kaitos (Diphda) ~ (Beta Ceti). This star is evolving from an orange giant into a red giant, with a surface temperature of 4,800 Kelvins; making it a bit less than our Sun. Its name, Deneb Kaitos and Diphda Deneb Kaitos comes from the Arabic phrase meaning “the Southern tail of Cetus” (Al Dhanab al Ḳaiṭos al Janūbīyy).

As Greek mythology tells the tale, Cetus was the sea monster that was to devour Andromeda for her mother’s vanity. However, even though Cetus is depicted as a whale, the Greek mythology portrays this beast as a hybrid of sorts. It had a scaly body like a sea serpent, huge jaws and feet on the front of its body.

In the myth, Cetus was to ravage the king and queen’s land unless their daughter (Andromeda) was left as a sacrifice for Queen Cassiopeia’s boastfulness. But before Cetus could take Andromeda, Perseus rescued her and they were later married.

Cetus is a fascinating constellation, so the next time you are gazing into the night sky, be sure to search out this intriguing figuration of stars.