Canopus is suspected to be nearing the end of its life cycle even though it is considerable young. Its mass is 65 times that of the Sun and shines with the luminosity of 14,000 suns. In fact, this star is so large if it were placed in the middle of the solar system it would reach 90 percent of the way to Mercur.

Canopus is located approximately 310 light-years away in the constellation of Carina. This constellation is the 34th in size (out of the 88) and is home to seven of the brightest stars in the night sky and several star clusters.

This star can be seen in its home constellation located in the second quadrant of the Southern hemisphere, specifically between latitudes of +20 and -90 degrees. Because this star is so bright it can be viewed by the unaided eye in most areas in the Southern hemisphere and for most of the year. If you are looking for specifics, Canopus never sets below the horizon from latitudes south of 37°18’ and never rises north of 37°18’, therefore it cannot be observed from far-northern latitudes. 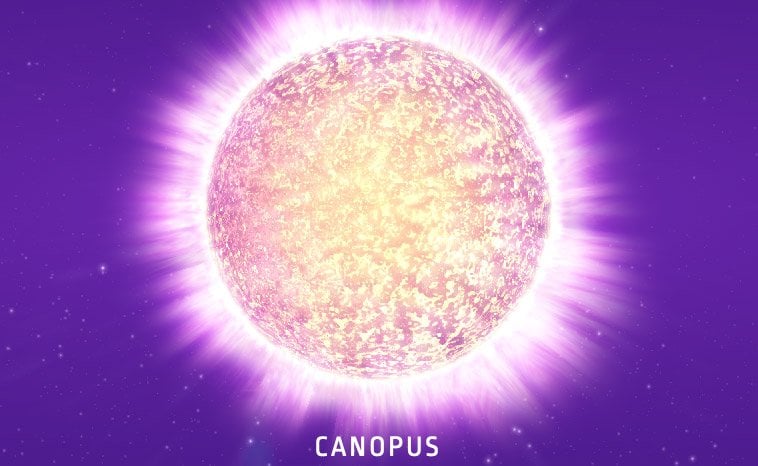 Canopus is an F-type bright giant star that is suspected to be nearing the end of its life cycle even though it is considerable young. Its mass is 65 times that of the Sun. In fact, this star is so large if it were placed in the middle of the solar system it would reach 90 percent of the way to Mercury.

Alpha Carinae is the second brightest star in the night sky with an apparent visual magnitude of -0.72 and an absolute magnitude of -5.53. It shines with the luminosity of 14,000 suns and has an effective surface temperature of 7,810 Kelvins or 13,600 degrees Fahrenheit (7,537 degrees Celsius). It was about 90,000 years-ago that Sirius moved close enough to outshine Canopus and will do so for another 210,000 years; however Canopus will once again outshine them all in about 480,000 years staying in this position for thousands of decades.

In the South, Canopus was a star with great significance, not only in the Ancient times, but also in modern history as it’s a primary navigational star. Canopus was once considered part of Argo Navis (the ship from famed Jason and the Argonauts) and marked the keel or rudder of the ship. However, the constellation of Argo Navis no longer exists, so Canopus (along with Vela and Puppis) were broken into three different parts and given their own designations.

The Greek astronomer by the name of Ptolemy in the 2nd century created Argo Navis, but it was later on in the 18th century that French astronomer, Nicolas Louis de Lacaille who divided it into the three smaller constellations (Carina, Puppis and Vela). As far as the name of Canopus, some accounts think it was named after the ship’s captain from the Trojan War, while others believe it was derived from Ancient Egypt meaning “Golden Earth.” This may be in part to this star’s appearance through the atmospheric haze near their horizon.

Canopus is not just another twinkling celestial object, it has some cold hard facts and true significance. So if you have a chance to view this fascinating star of “the ship” be sure to check it out.

Fly to Canopus in 3D!