Black holes comprise some of the biggest mysteries in space research. Recently scientists discovered X-Ray light emitting near the hole. Where did the light come from? Read on to learn more about black hole light beams.

The study of black holes always seems to add questions rather than answer questions. Mysterious and massive, black holes occur throughout space. The mystery keeps scientists busy trying to answer the questions where, when, why, and how. A recent observation regarding the black hole near the star V404 Cygni has researchers now asking what. What causes X-Rays to shoot outward near the center of the black hole?

Located about 7800 light-years in the constellation Cygnus, a star name V404 Cygni hosts a black hole close by. The star weighs as much as nine of our suns put together and feeds the black hole matter from its output. Consequently, scientists have been observing the black hole since June of 2015. At that time, international researcher, Dr. Poshak Gandhi captured bright outbursts of light. Strangely enough, small telescopes used by amateur astronomers captured the bright light. They believe that the light has enough energy to destroy an Earth-like planet if focused. 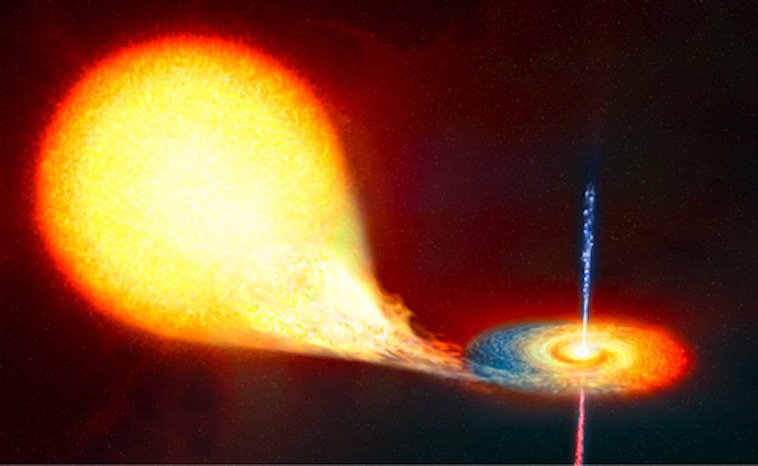 Researchers have a theory on how the jet forms. They know that matter outside the hole collects and as it grows it pulls in more matter. Consequently, the gravity within the disc twists and stretches the magnetic fields. This squeezes the material creating a hot plasma. At this point, the plasma erupts in the form of oppositely directed magnetic pillars along the black hole’s rotational axis. Plasma travels along these focused jets and gains tremendous speed, shooting across vast stretches of space. At some point, the plasma begins to shine brightly, but how and where this occurs in the jet has been debated by scientists.

The X-ray emission, representing the accretion disc ‘feeding’ the jet at its base, was captured from Earth orbit by NASA’s NuSTAR telescope, while the moment the jet became visible as optical light was caught by the ULTRACAM high-speed camera, mounted on the William Herschel Telescope on La Palma, in the Canary Islands.

Professor Vik Dhillon, of the University of Sheffield, the principal investigator behind ULTRACAM, commented: “This discovery was made possible thanks to our camera gathering 28 frames per second. It demonstrates the untapped potential of studying astrophysical phenomena at high speeds.”At the same time, radio waves from the extended portions of the jet plasma were observed by a team of Professor Rob Fender, of the University of Oxford, using the AMI-LA radio telescope, in Cambridge, UK.

The amazing ability to capture light emitting near the center of the black hole will allow researchers to learn more in the coming years. It will be interesting to see if other black holes do the same thing. What if they do something different? We may never know what exactly causes this phenomenon but each time they capture the light another question may be answered to this ongoing mystery.