Beta Tauri has the traditional name of Elnath which is derived from Arabic (al-nath) meaning ‘butting’ and is in reference to the bull’s horns of the Taurus constellation. When searching for Elnath, look for the ‘V’ shape of Taurus the Bull. Once you have located this pattern, Beta Tauri is the Northernmost star representing the bull’s left horn.

Beta Tauri is located approximately 131 light-years away in the constellation of Taurus. This constellation is the 17th in size (out of the 88) and is home to two meteor showers (the Taurids and the Beta Taurids) as well as two Messier objects (the Crab Nebula and the Pleiades).

This star can be seen in its home constellation located in the first quadrant of the Northern hemisphere, specifically between latitudes of +90 and -65 degrees. Because this star is bright it can be viewed by the unaided eye. When searching for Elnath, look for the “V” shape of Taurus the Bull. Once you have located this pattern, Beta Tauri is the Northernmost star representing the bull’s left horn. 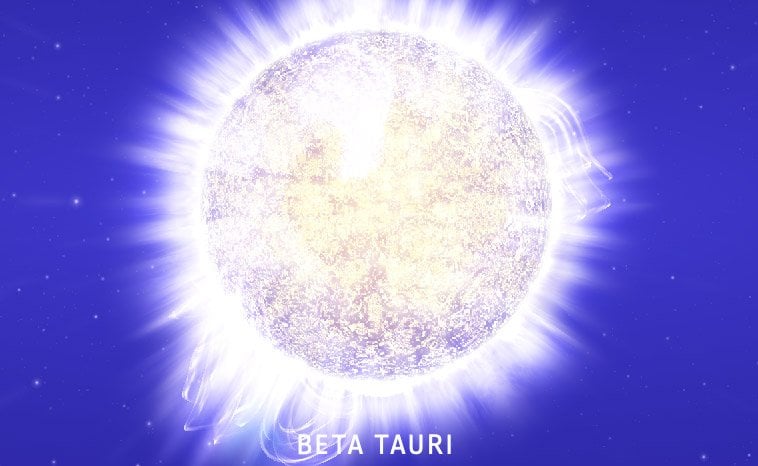 Elnath is a giant star with the stellar classification of B7 III which has begun to evolve away from the main sequence. This star is also noted for having high levels of manganese, but not so much of the elements magnesium or calcium. Astronomers are now recognizing a faint visual companion star approximately 33.4 arcseconds away from the primary, therefore Elnath may be considered a double star.

Beta Tauri is the 2nd brightest star in its home constellation and the 28th brightest star in the night sky. It has an apparent visual magnitude of 1.65. It is also the closest bright star to the “galactic anticenter” (the point in space situated exact opposite of the Milky Way). In addition, Elnath shines approximately 700 times that of the Sun and has an effective temperature of 13,600 Kelvins or 24,000 degrees Fahrenheit (13,315 degrees Celsius).

Historically, Beta Tauri has been a part of the Taurus constellation since the Early Bronze Age, as it marked the Sun’s location during the Spring Equinox. This constellation is also significant to many cultures and, in fact, a cave painting in Lascaux (dating back to around 15,000 B.C) shows this constellation along with the Pleiades (the Seven Sisters). Taurus most likely even dates back to the ancient Greeks, Egyptians and Babylon.

As time moved forward an astronomer named Ptolemy considered Beta Tauri to be shared by the constellation of Auriga. Later on Bayer assigned it a designation in both Auriga and Taurus. However, by 1930 the modern constellations and their boundaries were fixed placing Elnath in Taurus where it remains today.

Greek mythology tells us Zeus once disguised himself as Taurus the bull in order to seduce and kidnap the daughter of King Agenor. Zeus took this form and caught the attention of the Princess (he was the most handsome of the herd). When Princess Europa seated herself upon the bull’s back, he raced off to Crete where he finally revealed himself as the god.

Beta Tauri is not just another twinkling celestial object, it has some cold hard facts and true significance. So if you have a chance to view this fascinating star of the “bull” be sure to check it out.

Fly to Beta Tauri in 3D!