Beta Ceti has two traditional names, Deneb Kaitos or Al Dhanab al Ḳaiṭos al Janubiyy in Arabic and Diphda, meaning ‘the southern tail of Cetus‘ and ‘the second frog’ respectively. It shines approximately 145 times that of the Sun and because it exhibits periodic flares, its brightness does change.

Beta Cetiis located approximately 96.3 light-years away in the constellation of Cetus. It is the 4th largest constellation in size out of the 88 and is home to one Messier and three meteor showers; the October Cetids, the Eta Cetids and the Omicron Cetids. Cetus is also a part of the Perseus family of constellations.

This star can be seen in its home constellation located in the first quadrant of the Southern hemisphere, specifically between latitudes of +70 and -90 degrees. Because this star is bright it can be viewed by the naked eye by people in the Northern hemisphere, around the mid-latitudes. It is best viewed in the autumn months in the south sky and is at its highest point between 9 and 10 pm until mid-November. 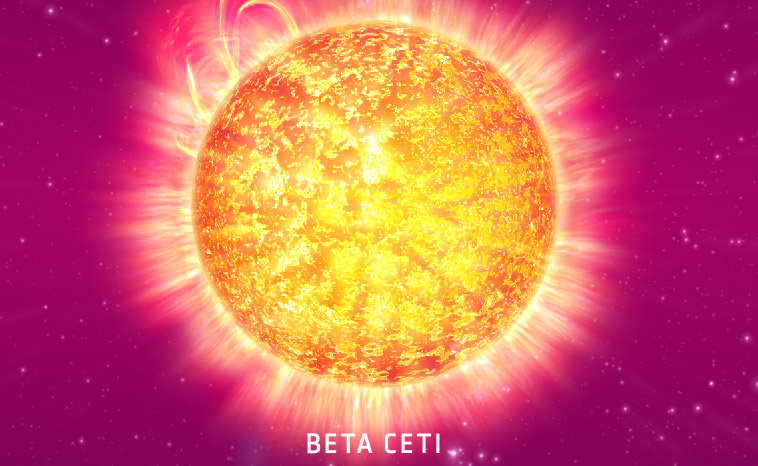 Beta Ceti is an orange giant which belongs to the spectral class of K0 III which has now left the main sequence. It went through the red giant phase and also a helium flash and is now generating energy in the form of a thermonuclear fusion of helium at its core. This process could last for over 100 million years. Deneb Kaitos is also 2.8 times the mass of the Sun and 18 times its radius.

Beta Centauri is the brightest star in Cetus with an apparent visual magnitude of 2.04. It shines approximately 145 times that of the Sun and because it exhibits periodic flares, its brightness does change. In addition, Deneb Kaitos has a surface temperature of 4,800 Kelvins or 8,180 degrees Fahrenheit (4,526 degrees Celsius).

Although, there is no mythology surrounding Beta Ceti specifically, its home constellation of Cetus was placed in the heavens to signify the sea monster in Greek myths. As legend has it, Andromeda was left as a sacrifice to “the great whale” to appease the angry god, Poseidon for her mother’s boastfulness. However, before the monster could take her, Perseus rescued the princess and they were later married.

Beta Ceti is not just another twinkling celestial object, it has some cold hard facts and true significance. So if you have a chance to view the “southern tail of Cetus” star be sure to check it out.