Beta Centauri is made up of three stars and is the 10th brightest star in the night sky shining 15,500 times more than the Sun. In mythology, the culture of the Boorong people called this star (along with Alpha Centauri) Bermbermgle. They signified two brothers who were known for their courage for killing Tchingal ‘the Emu’ from the Coalsack Nebula.

This star can be seen in its home constellation located in the third quadrant of the Southern hemisphere, specifically between latitudes of +25 and -90 degrees. Because this star is bright it can be viewed by the naked eye by people in the Southern hemisphere and only briefly to those living from South Texas and certain parts of Florida. The best time to catch a glimpse of Hadar in the viewing areas is in early May. By nightfall in early June, this star will have reached its highest point. 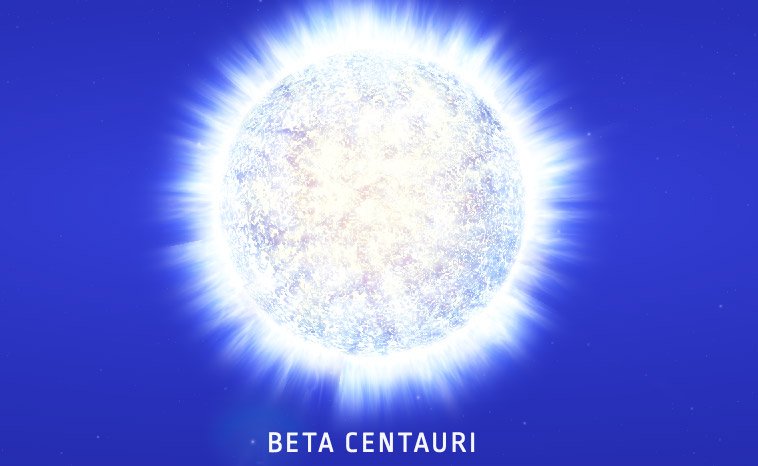 Hadar is a three-star system made up Beta Centauri A1, A2 and B. Beta Centauri A1 and A2 are giant stars that have moved away from the main sequence due to the burning up of all their core hydrogen. These two stars are almost identical in mass and orbit each other over a period of 357 days and are separated by only 4 astronomical units (approximately 600 million kilometers). Beta Centauri B is a B1 dwarf star that orbits the other two at a distance of 0.6 light-years over a period of 1,500 years.

Hadar in the Southern hemisphere is the inner star of the two “Pointers” directing the way to the Southern Cross. This is done by drawing a line from Alpha Centauri, through Hadar which leads a few degrees from the top of the cross where Gacrux is located. By using this star (Gacrux) navigators are able to draw a line to Acrux to determine due south. In mythology the culture of the Boorong people (northwestern Victoria) called this star (along with Alpha Centauri) Bermbermgle. They signified two brothers who were known for their courage for killing Tchingal “the Emu” from the Coalsack Nebula.

Beta Centauri is not just another twinkling celestial object, it has some cold hard facts and true significance. So if you have a chance to view this “ground/knee” star be sure to check it out.

Fly to Beta Centauri in 3D!