Alpha Ceti has a traditional name of Menkar which derived from Arabic meaning “the nostril” of the constellation of Cetus the whale. Alpha Ceti is a very old star which is approaching the end of its life. It will eventually burn through all its core elements to become a planetary nebula with a white dwarf remnant left behind.

Menkar is located in the constellation of Cetus and situated about 249 light-years in distance. The star along with its constellation lies within a region of the sky referred to as “the Water.” Here you will also find other water signs like, Pisces, Aquarius and Eridanus. In addition, a barred spiral galaxy by the name of Messier 77 is also in this region.

If you want to check out Alpha Ceti and you are in the northern temperate and polar latitudes, it can be best viewed due south around December 21st at 9 pm, then again high up and due south at 7 pm on January 21st. To easily locate Menkar look for the face of the bull (V-shaped Hyades Cluster) in Taurus as it will point the way to Alpha Ceti. To make it easier, stretch out your arm making a fist towards Taurus’s head. Now simply move to fist-widths from the point of the “V” to locate its approximate location. 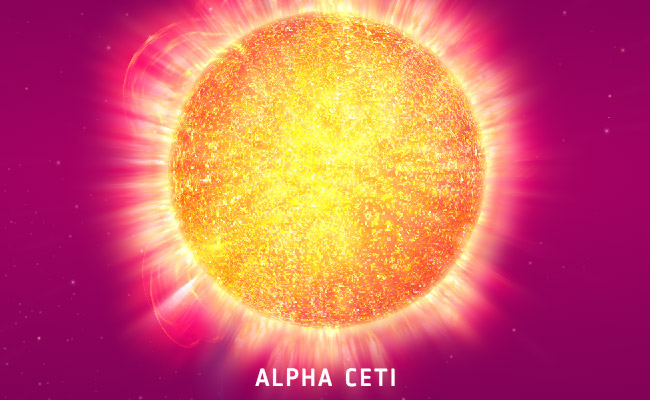 Alpha Ceti is a very old red giant star that is about twice the mass of the Sun and is also approaching the end of its life cycle due to the depletion of helium and hydrogen at its core. Menkar is also expanding to become a giant star which will be 89 times the radius of our Sun. Eventually as Alpha Ceti continues to burn through its core element it will become unstable and begin to shed its outer layer, forming a planetary nebula with a white dwarf remnant.

Although Menkar is given the Bayer designation of Ceti, it is not the brightest star in this constellation, but the second brightest with a visual magnitude of 2.54. Its outer layer is emitting around 1,455 times that of our Sun and burns at 3,795 Kelvins (6,371 degrees Fahrenheit or 3,521 degrees Celsius). Due to this “low” temperature, Menkar shines with a reddish-color which is a tendency of these cooler stars (red hot is cooler than white hot).

In the 2nd century, Greek astronomer, Ptolemy, catalogued this star along with 88 constellations we know today. In Greek mythology, Alpha Ceti represents the eye of the whale in which Princess Andromeda was sacrificed to due to her mother, Cassiopeia’s, vanity and boastfulness. Alpha Ceti has also made its debut in the science fiction works of Star Trek. The Original Series used Alpha Ceti V as the planet the infamous Khan and his crew were exiled on. In Star Trek Enterprise, this star was a place of refuge after the Xindi destroyed planet Earth.

Alpha Ceti is not just another twinkling celestial object, it has some cold hard facts and true significance. So if you have a chance to view this natural wonder in the Cetus constellation be sure to take a look at one of the most intriguing views you may ever experience.

Fly to Alpha Ceti in 3D!