You may or may not remember the “explosive”event three years-ago that shook Chelyabinsk, Russia and six other cities in the area when a meteor zipped through the atmosphere a mere 12 miles (20 kilometers) above their heads.

We hear about comets and other space-rocks and debris making close encounters with Earth’s atmosphere, but the 1,433 pound (650 kilogram) meteor that quickly crashed into Lake Cherbarkul was nothing short of terrifying.

Over 960 video recordings were taken my various private and official citizens showing the meteor tear up the early morning sky. In doing so it released 500 kilotons of energy, which is estimated to be around thirty times the yield of the Hiroshima nuclear bomb. The shock-wave that followed careened out for 75 miles (120 kilometers) which caused numerous windows and their frames to explode in hundreds of buildings. The wide-spread damage and human injury did not go unnoticed with approximately five tons of meteoric-material slamming into the ground. 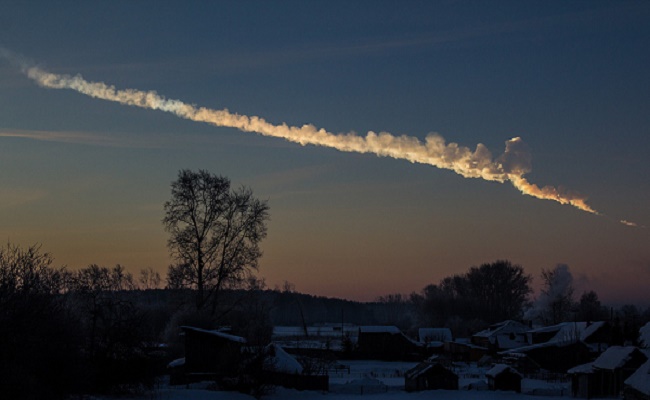 So where did this massive meteor originate?

Scientists are still in a quandary over the true origins of the Chelyabinsk meteor and that’s after over 200 papers have been written on the topic!

However, interestingly enough, on the same day (February 15th, 2013) the asteroid (367943) Duende approached the Earth. Duende was originally discovered in Spain, but passed safely above the Earth’s surface around 17,211 miles (27,700 kilometers) so no damage was felt. These coinciding events led a team of researchers to start digging…perhaps Chelyabinsk was a chunk off of the Duende meteor? This would logically fit the timing of both events, but after extensive studies of the orbits and the spectroscopic data of both asteroids analyzed, it was determined the two objects were not related. 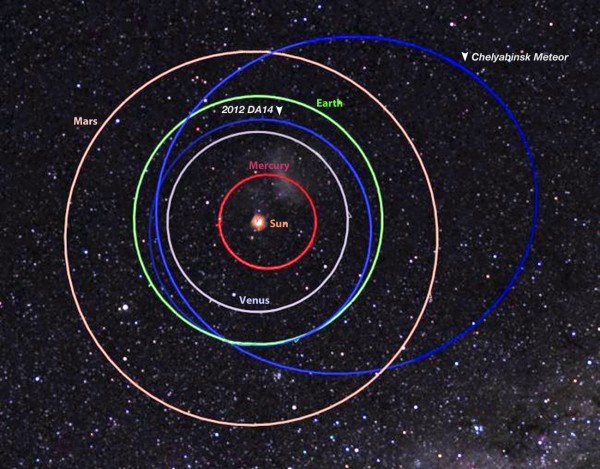 The difference in Chelyabinsk and Duende’s orbital paths in blue.

Carlos de la Fuente Marcos, co-author of one of the research works had a different theory. He said in a statement;

“For a while, it was thought that asteroid (86039) 1999 NC43 was a good candidate for the parent body of the Chelyabinsk superbolide, but after the publication of a detailed international study, it became clear that the Chelyabinsk impactor and the PHA 86039 (1999 NC43) were not part of the same object; from a dynamical and compositional point of view, the relationship between both objects is too weak.”

Although, there has been more than one theory as to the origins of this super-sized space rock, researchers are now looking at the possibility that the Chelyabinsk impactor likely passed a gravitational keyhole on February 15, 1982 during a close encounter with our planet. At the time, it was a safe distance of 140,000 miles (224,000 kilometers). However, as a result of this close encounter, the initial trajectory of the Chelyabinsk meteoroid was changed, putting it directly on a collision course with Earth three decades later.

We may never know what exactly made Chelyabinsk slam into our delicate planet, but rest be assured, scientists and researchers are always on the lookout for possible stray space rocks. Will there ever be another meteorite hit to Earth? The scientific world always has their eyes and gadgets peeled to forewarn us if one should ever pose a problem. In the meantime, keep your eyes and telescopes aimed at the sky, you never know what might zip past…

How to Conquer Your Valentine

Grab Your Sunscreen, You Are Going to Need It

Harlow Shapely-Size of the Galaxy