Something unusual happened 4,000 years ago in the remote areas of our galaxy. The mysterious signal with extremely low periodicity, which has not been noticed in space so far, aroused great interest in the world and domestic media.

The spooky radio signal broadcast in that event traveled through the cosmic wilderness, while some completely different, local historical circumstances changed on Earth, so that when it reached our planet and caused genuine confusion among astronomers.

Through the vast expanse of red-brown land, overgrown with small vegetation, the so-called bush, where rains are rare, but in large quantities, only huge flocks of sheep and cows have moved in previous decades.

Here, at the lonely cattle station, astronomers recently put up a radio telescope called the Murchison Widefield Array (MWA), which records signals from space in the low frequency range.

The MWA project is ambitiously designed to look at the sky in a new way, as it continuously records and discovers hundreds of phenomena in the higher frequency range, while, with the exception of pulsars, little has been seen in the low frequency sky.

However, no one expected the discovery of something as eerie as the extremely strong signals sent by (GLEAM-X) J162759.5-523504.3, which is a sign of the still unnamed, apparently very dense and very magnetized object at a distance of about 4000 light years.

This is, by the way, very little for space conditions, almost in the galactic neighborhood.

With the help of the MWA telescope, the object was discovered by astronomers from the University of Curtin in Western Australia, doctoral student Tyrone O’Doherty and Professor Natasha Harley-Walker, who were inevitably compared by the media to the heroes of the popular movie Don’t Look Up.

Their discovery was published on January 27 by the prestigious journal Nature in a paper entitled “A radio transient with unusually slow periodic emission”, in which O’Doherty and Harley-Walker report that they reviewed the MWA archive and found that the facility was active in 2018, from January to March.

Since the 1960s, astronomers have been hunting for signals that periodically disappear and reappear, but this usually happens every few seconds or milliseconds.

Such signals are constantly emitted by pulsars, which is the name for rotating neutron stars, strange, extremely dense objects that remain after a supernova explosion.

Pulsars can also be imagined as lighthouses whose reflector turns and whose beam periodically hits the ship on the high seas, but this object does not seem to be a pulsar. 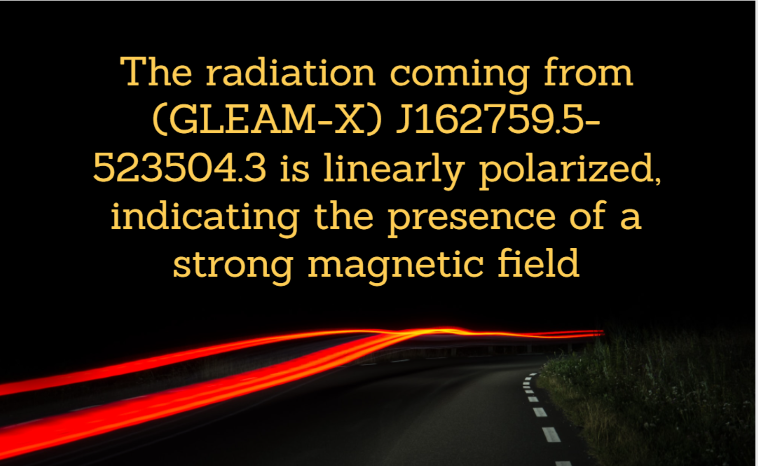 The spooky object discovered by the Australians does not emit a signal after a few seconds, as pulsars do, but every 18 minutes.

Harley-Walker explained in the media in the previous days that the slowest pulsar so far has a periodicity of 112 seconds, and if this were a pulsar, it would have to have a magnetic field that is 100 times stronger than anything in space.

Namely, the object emits a signal that lasts from 30 to 60 seconds, and then it is silent, which is repeated every 1091 seconds (which is precisely 18 minutes and 11 seconds).

The radiation coming from (GLEAM-X) J162759.5-523504.3 is linearly polarized, indicating the presence of a strong magnetic field, but although astronomers have analyzed a number of possibilities in previous days, no definitive explanation for the origin of this signal has been offered.

Could it be aliens?

Among other things, the possibility that you, no doubt, thought about was considered – that the signal originated from an alien civilization.

However, scientists reject this option because the signal covers too many frequencies to be artificial – it requires an extremely large investment of energy without real justification.

However, the secret that keeps this spooky body silent for 18 minutes, and then emits an extremely strong beam of air, to plunge back into eighteen minutes of silence, is not an easily accepted explanation, becoming one of those questions from the pantheon of unsolved mysteries of the universe.