The astronomical events of October 2020

October is full of surprises this year – especially surprises in the night sky! Come explore the astronomical events of October 2020 with us! Learn more about the Harvest Moon, the Camelopardalid meteor shower, the Orionid meteor shower, and the close approach of the Moon and Saturn. 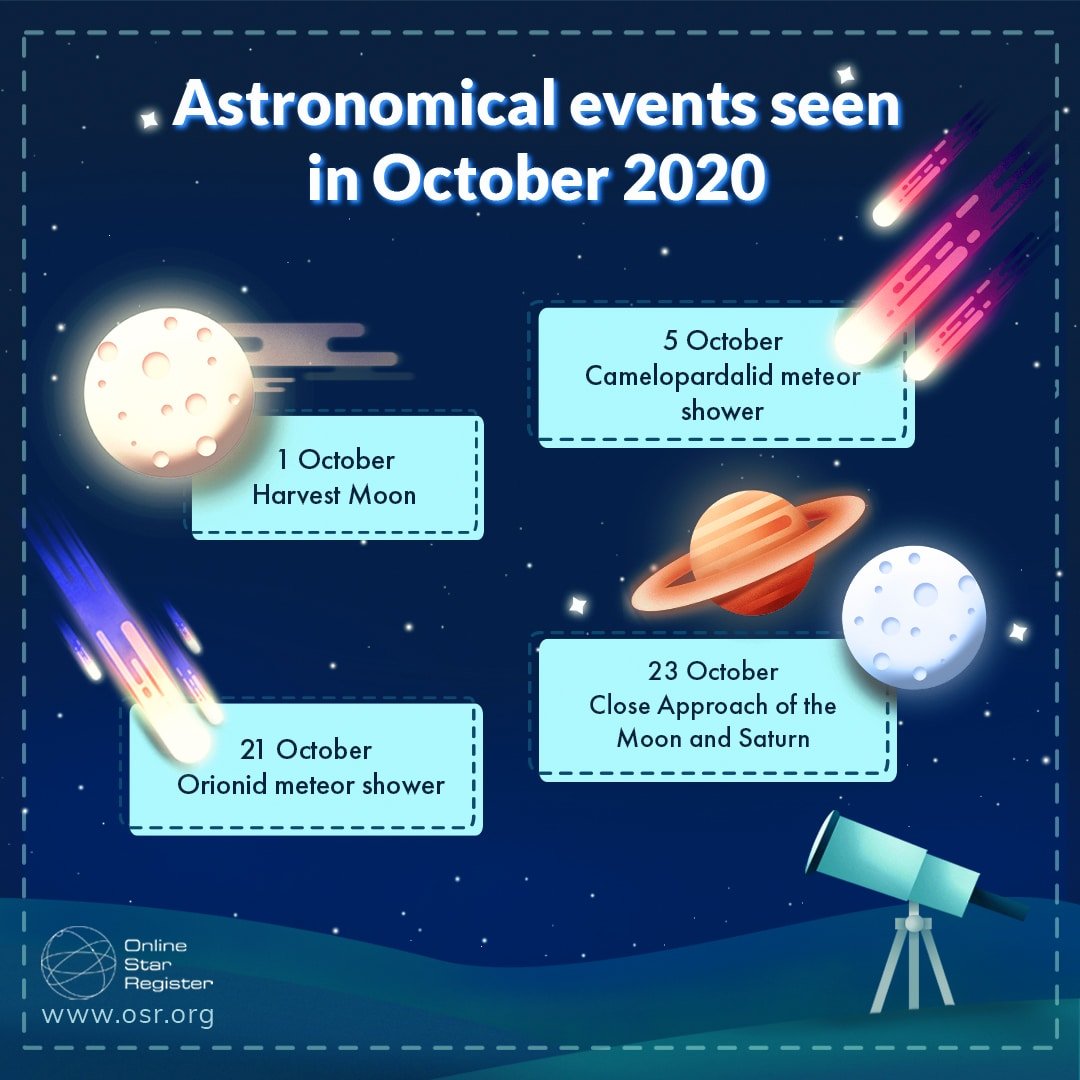 The full moon of the month October is called the Harvest Moon. The names of full moons are recorded from the early 18th century. It is said that the name of the Harvest Moon originates from a time before electricity, when farmers depended on the Moon’s light to harvest their crops late into the night. The Harvest Moon will be the first full moon to fall in autumn 2020.

After a full moon, the Moon continues its journey through the night sky and heads back towards the Sun. This causes the Moon to rise around 49 minutes later each day and within a few days it will only be visible in the pre-dawn and early-morning sky.

Hence the Camelopardalis meteor shower is still a bit of a mystery. Therefore, astronomers keep analyzing the Camelopardalids meteors. They hope that measuring more orbits may eventually help determine the orbit of the comet, enabling us to finally locate and track it.

The Orionid meteor shower will be active from the 2nd of October to the 7th of November. The most meteors will be falling on Wednesday the 21st of October. You don’t need to know Orion or be looking at it to be able to view the meteors. After all, the meteors often don’t become visible until they are 30 degrees or so from their radiant point. Therefore, the Orionid meteor shower will appear in all parts of the sky.

Astronomical Event #4: Close approach of the Moon and Saturn

In October, the Moon and Saturn will make a close approach to each other, while at the same time being at conjunction. Any time two objects in the night sky pass each other, they’re said to be in conjunction. These sorts of conjunctions can happen multiple times every month.

The close approach of the Moon and Saturn on Friday the 23rd of October will be visible in the constellation Sagittarius. Sagittarius, also known as The Archer, is visible from both the Northern and the Southern Hemispheres. Need help finding the constellation? Use the OSR Star Finder App!

During this close approach the Moon will be at magnitude -11.8 and Saturn will be at magnitude 0.3. This means that they will both be easily visible with the naked eye. Unfortunately, the close approach will not be close enough to fit within the view of a telescope, but you will be able to see the Moon and Saturn with the naked eye or by using a pair of binoculars.

We hope to have given you enough reasons to go out exploring the night sky with the astronomical events of October 2020! From the Harvest Moon to the Camelopardalid and Orionid meteor showers and the close approach of the Moon and Saturn – there’s enough to discover!