The astronomical events of November 2020

November will be a month with some amazing astronomical events to discover! Come explore the astronomical events of November 2020 with us! Learn more about Mercury’s highest point in the morning sky, the appulse of the Moon and Venus, the Northern Taurid meteor shower and the Penumbral Lunar Eclipse! 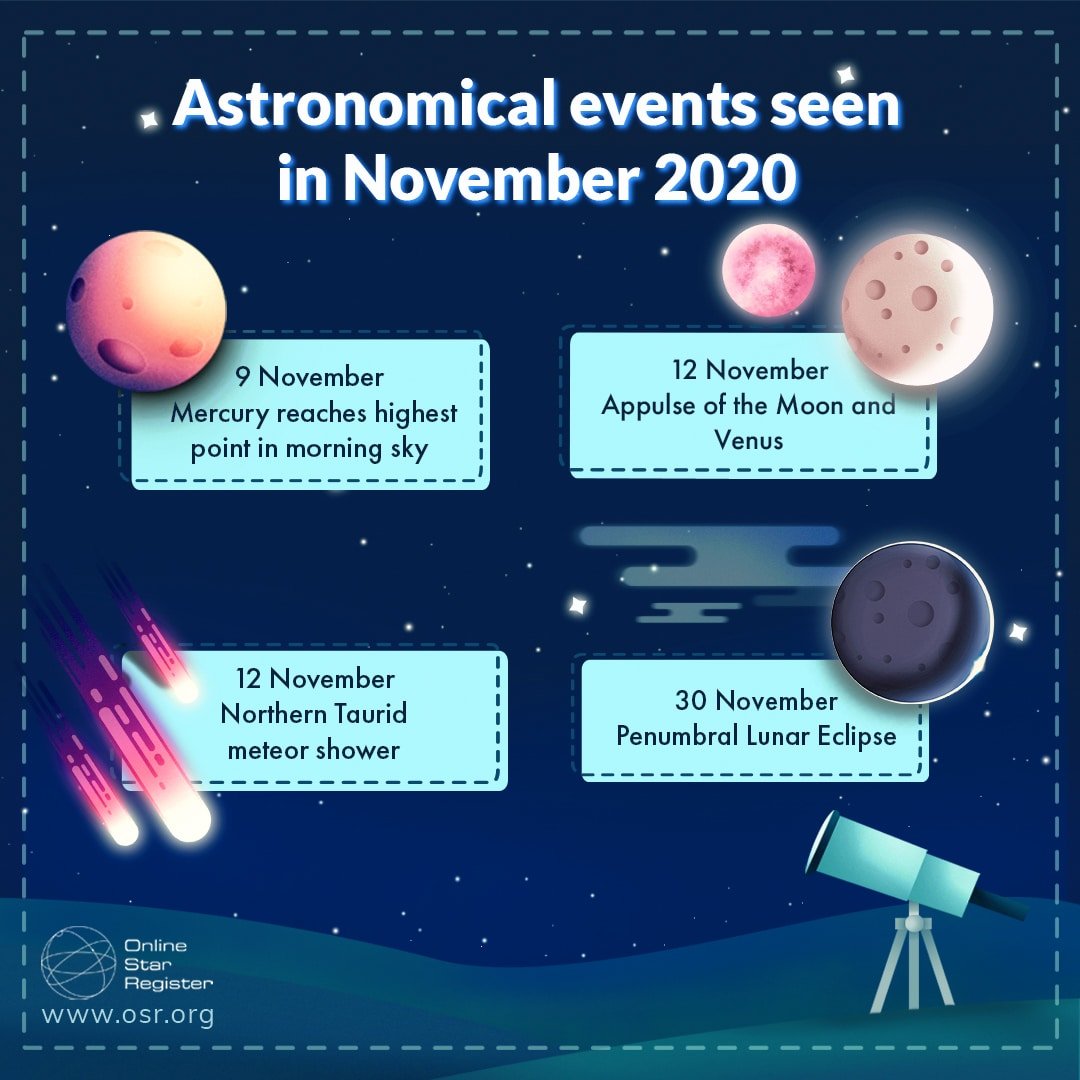 Astronomical Event #1: Mercury at its highest point in the morning sky

Mercury lies closer to the Sun than the Earth does. This causes Mercury to often get lost in the Sun’s glare. Therefore, Mercury is only observable for a few weeks when Mercury is at its highest point in the morning sky. This only happens each 3 to 4 months. The position of Mercury when it reaches its highest point will be: RA 13h53m00s -09°09′ dec -0.6 mag in the constellation Virgo. Want help with looking up these coordinates with your OSR Star Map? Watch the OSR Star Map Tutorial video.

On Monday the 9th of November, you will be able to see Mercury either in the east or in the west. When Mercury lies to the east, it rises and sets a short time after the Sun and is visible in early evening twilight. When it lies to the west of the Sun, it rises and sets a short time before the Sun and is visible shortly before sunrise. Make sure to not point a pair of binoculars or a telescope at Mercury when looking at it, since it will be close to the Sun.

Astronomical Event #2: Appulse of the Moon and Venus

An appulse is a technical term for a close approach of two astronomical objects. This November we will be able to see the appulse of the Moon and Venus in the night sky. This is a beautiful astronomical event to view since Venus is the brightest planet in our starry sky. Unlike Mercury – Venus can still be observed around midnight when it is at a great angular distance from the Sun. Because of this, we usually find Venus in the morning or evening sky, as an extremely bright “star”.

So how does an appulse work? Well, as the Moon and planets move along the ecliptic at different speeds, they pass each other from time to time. In some cases this is extremely rare such as with the conjunction of the planets Uranus and Neptune. However, conjunctions and appulses with the Moon are more common. The Moon passes a conjunction with every planet roughly once a month.

The Northern Taurid meteor shower will be producing its peak rate of meteors on the 12th of November. It will be visible around midnight and early morning, depending upon your exact location. The shower will peak close to the new moon, and so moonlight will present minimal interference. Therefore, it will be easier to find the meteors!

Like other lunar eclipses, penumbral eclipses occur whenever the Earth passes between the Moon and Sun. Therefore, it obscures the Sun’s light and casts a shadow onto the Moon’s surface. In a penumbral eclipse the Moon passes through an outer region of the Earth’s shadow called the penumbra. This is the outer part of the Earth’s shadow, in which the Earth appears to cover part of the Sun’s disk, but not all of it.

The effect of a penumbral lunar eclipse is therefore only perceptible to those with very good vision. Only 82% of the Moon’s face will pass within the Earth’s penumbra at the moment of greatest eclipse, and so a reduction in the Moon’s brightness may be perceptible. Therefore, unlike other kinds of eclipses, a penumbral lunar eclipse is an extremely subtle events to observe. A lunar eclipse happens roughly once every six months, usually two weeks before or after a solar eclipse. The solar eclipse will be taking place on the 14th of December.

We hope to have given you enough reasons to go out exploring the night sky with the astronomical events of November 2020! From Mercury’s highest point in the sky, to the appulse of the Moon and Venus, the Northern Taurid meteor shower and the Penumbral Lunar Eclipse. The night sky of November is full of surprises!