A far away galaxy, called W2246-0526, is (according to research) the most luminous galaxy known, which was discovered by NASA’s Wide-field Infrared Survey Explorer (WISE). However, it is not only producing the highest power output of any galaxy in the universe, it is also ribbing itself apart.

This is due to a tremendous black hole in the midst of W2246-0526 which is producing so much energy it is stirring up clouds of dust across the entire galaxy. A phenomenon that has in fact, never been seen before in a space object like this!

“It is like a pot of boiling water being heated up by a nuclear reactor in the center!” 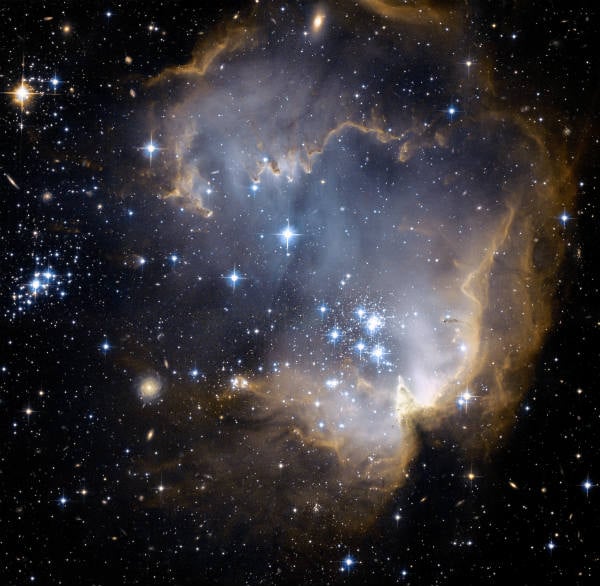 This galaxy is thought to have formed around 1 billion years-ago and contains large amounts of ionized carbon in a very turbulent state, which appears to be coming from a growing super-massive black hole at the center of the galaxy. This is due to the gravitational pull of the black hole, attracting the surrounding gas and other matter. This material then forms a structure around it called an accretion disk. In turn, friction from this disk produces an intense brightness, shining like a combination of more than 300 trillion Suns! Even though the black hole itself is thought to be considerable smaller than the galaxy, the energy it is emitting by the gobbling up of material in its path is affecting gas thousands of light-years beyond it.

“This galaxy is tearing itself apart,” said Roberto Assef from the Universidad Diego Portales. “The momentum and energy of the particles of light deposited in the gas are so great that they are pushing the gas out in all directions.”

While turbulence around these black holes is not uncommon, the rarity of highly turbulent gas across the whole galaxy is unique.

Peter Eisenhardt from NASA’s Jet Propulsion Laboratory in Pasadena, California states; “The ‘boiling’ gas is not in the accretion disk. The whole galaxy is being disturbed.”

Researchers are not sure if this gas is strong enough to be totally pushed out into space or if it will eventually fall back into the black hole.

Assef remarks; A likely finale would be that the galaxy will blow out all of the gas and dust that is surrounding it, and we would see the accretion disk without its dust cover — what we call a quasar.”

This powerful galaxy with a super-massive black hole is rare, but not so rare that it doesn’t have its own name; Hot, Dust-Obscured Galaxies or Hot DOG, which affects only 1 out of every 3,000 galaxies.

The WISE mission was launched for this specific purpose and is essential to finding this galaxy because the object is covered in dust (obscuring its light from visible-wavelength telescopes) WISE is able to pick up the infrared range so that the dust shifts the light from the galaxy into the infrared range.

One would think that with all the exploration man has done in space we would be left with no surprises, but that simply isn’t so. As long as we have two eyes and technology at our disposal, we are sure to continue to be amazed and astounded at the marvels of our galaxy and far beyond the reaches of our imaginations.