Part 1: We answer questions about the notorious Webb telescope

So far everyone is familiar with this telescope, but you may have doubts about its characteristics or operation. Let’s try to clarify some of them.

Is Webb the successor to ‘Hubble’?

Both yes and no. As for the design, no, it’s not. ‘James Webb’ is a space telescope that will observe the infrared region of the spectrum (0.6 to 28.5 microns), while ‘Hubble’, although studying near-infrared, is still focused on the visible spectrum, as well as ultraviolet.

In that sense, ‘James Webb’ is the successor to other infrared space telescopes such as IRAF, ISO, ‘Akari’, WISE or ‘Spitzer’. However, the ‘James Webb’ is, like the ‘Hubble’, the ‘general’ telescope. That is, it will study practically all astronomical objects that exist with unprecedented resolution in the infrared region and will revolutionize all branches of astronomy. In that sense, he will be a worthy successor to ‘Hubble’.

And why the infrared spectrum?

For many reasons. The two main goals of ‘James Webb’ are to study the formation of the first stars and galaxies when the Universe was very young. The visible light of these stars is currently reaching us in the form of infrared radiation due to the expansion of the cosmos, so if we want to directly observe the first luminous objects that were created, we must use this slice of the spectrum.

Why does it have such a strange shape?

In order to be able to observe things in the infrared region, the telescope must be as cold as possible, so its design must necessarily be very different from others observing the visible spectrum.

‘James Webb’ is the first large infrared telescope launched into space to observe this region of the spectrum without the use of active cooling – a rather major technological feat. To do this, ‘James Webb’ will use a collapsible solar shield composed of five layers of ‘capton E’ (flexible electronics) that will keep the telescope’s optics at just 40 kelvins above absolute zero. 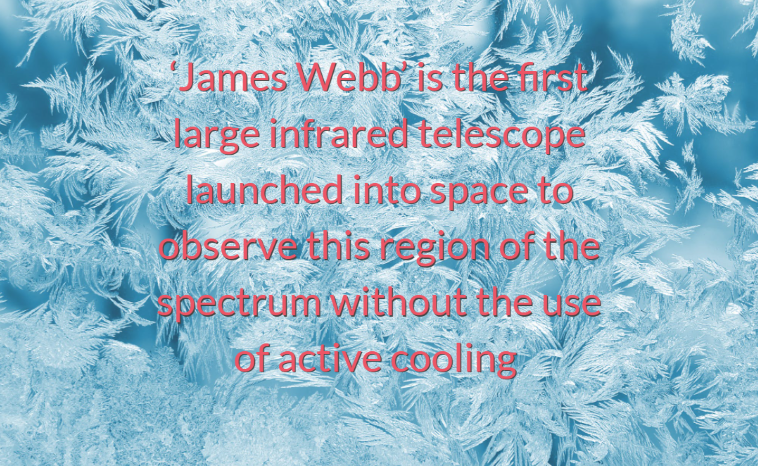 The infrared space telescopes launched so far used liquid helium to cool the entire spacecraft to near absolute zero, but this technique has a downside because the coolant – helium – eventually wears out and the telescope becomes useless. The use of a passive cooling system will ensure that the life of the ‘James Webb’ is not limited by this factor (it is limited only by the fuel for maintaining the orbit). To be precise, the MIRI instrument will use helium for its cooling to -266ºC, but this system is of the closed type and, in principle, limited only by the wear of moving parts and not by helium reserves.

Why does ‘James Webb’ use a segmented mirror?

The shape of the ‘James Webb’ primary mirror, reminiscent of an elegant golden honeycomb, is its main feature, but why is it so and why does it not use a single mirror like the ‘Hubble’ telescope?

The main reason is related to size. The ‘James Webb’ mirror when spread out has a diameter of 6.5 meters, which is significantly larger than ‘Hubble’s’ 2.4 meters. When the project was conceived in the late 90’s, there was simply no rocket available with a tip that could receive a 6.5-meter mirror, nor was it expected soon.

Today, however, there are already projects with wider fairings, such as the future ‘New Glenn’ rocket of the company ‘Blue Origin’ (7 meters) or those that will carry advanced versions of SLS (8.4 meters), but they arrive too late.

In any case, constructing a 6.5-meter monolithic mirror would involve another number of limitations and technological challenges, so proposals for future large space telescopes will also feature segmented mirrors, whether or not rockets are capable of launching them into one piece.