Always wanted to know more about the planet Mars? Search no further! In this blog we tell you everything about Mars. Read how Mars originated, where Mars can be found, how the planet works and when you can view the planet from Earth!

Learn everything about our planet Mars. In this blog, we share various facts about Mars with you – and we’re not talking about the chocolate bar! The planet Mars is very impressive and we would like to tell you some interesting facts about Mars. For example, did you know that Mars is the fourth planet from the Sun? On top of that, the origin of Mars’ name came from the Roman God of war! Curious about even more information about our planet Mars? Read on!

Mars is about 4.57 billion years old and originated from the so-called Solar Nebula, just like the other astronomical objects in our solar system. As just mentioned, Mars is the 4th planet from the Sun. Mars is also the second smallest planet in our solar system. Only the planet Mercury is even smaller than Mars!

The presence of a special kind of dust on the surface gives the planet a red glow. That is why Mars is also known as the “red planet”. The name Mars originates from the Roman God of war. 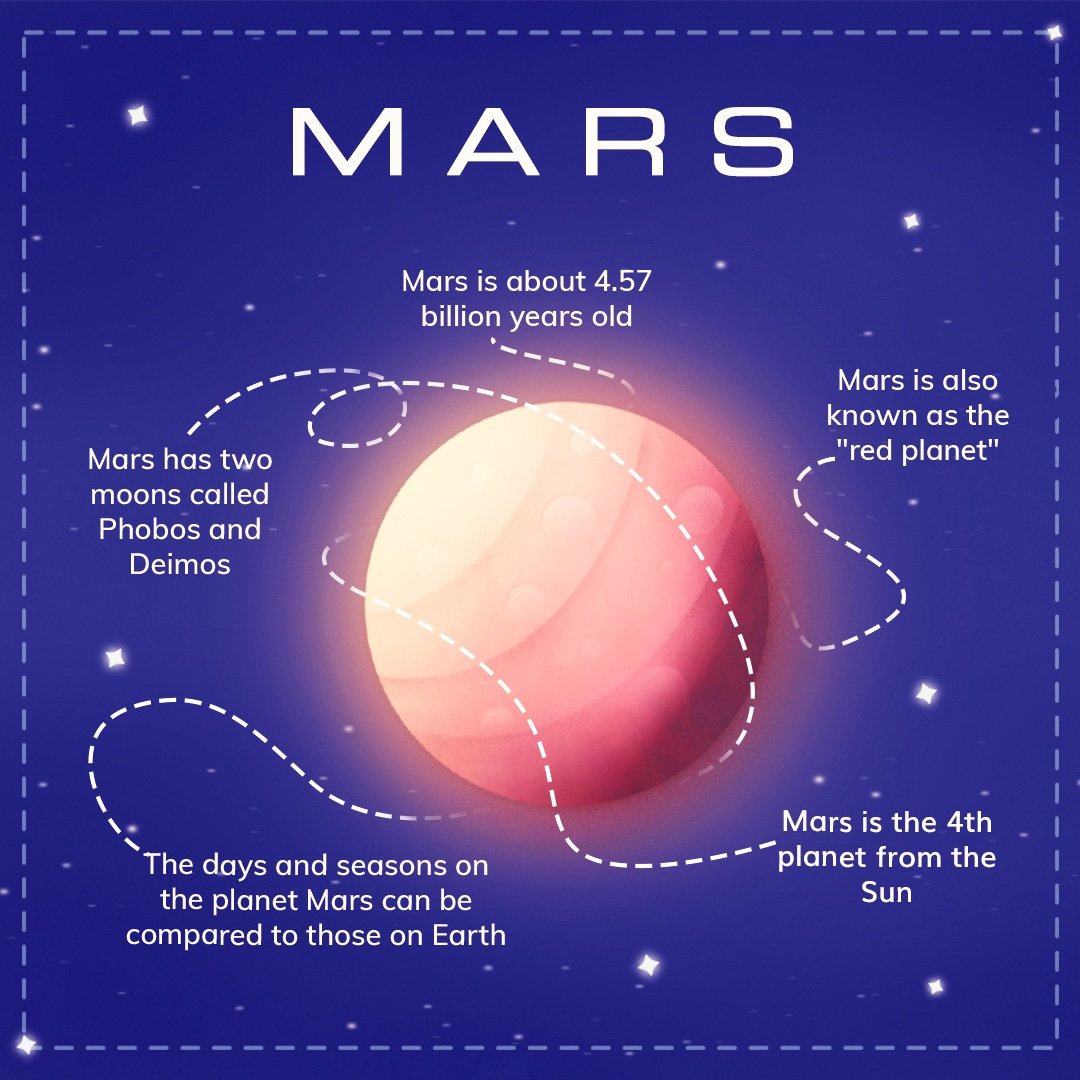 Located on Mars is a volcano called Olympus Mons. This volcano is three times as high as the highest mountain on Earth, Mount Everest. Additionally, Olympus Mons is the largest volcano on a planet of our solar system, so this makes Mars very special! This volcano is 22 kilometers high and has a diameter of 600 kilometers.

Planet Mars and our galaxy

The days and seasons on the planet Mars can be compared to those on Earth. This is because Mars has an axial tilt of 25.19 °, which is quite close to Earth’s 23.44 ° value. This means that Mars, like Earth, also has the same seasons as spring, summer, autumn and winter. There are some minor differences, however. For example, summers or winters in the northern hemisphere of Mars are very different from summers and winters in the southern hemisphere. An encounter with extreme temperatures will therefore not be uncommon on the planet Mars.

The planet Mars has two moons called Phobos and Deimos. The moons of Mars are both small and irregular in shape. The moon Phobos rises in the West and descends in the East and rises 11 hours later. The moon Deimos is a little further away from Mars and therefore rises a lot slower. It takes about 2.5 days for the moon Deimos to set again.

So while the days are about as long as the days on Earth, a year is twice as long! That’s because Mars is one and a half times farther from the Sun than Earth. So the planet Mars takes longer to travel around the Sun.

Living on the planet Mars?

Did you know that the volume of these ice caps, if it should melt, will be enough to cover the entire surface of the planet Mars in water of 11 meters deep?

Elon Musk, CEO of SpaceX, ultimately wants to make Mars livable for humans, a concept called terraforming. Musk wants to do this by transforming Mars into a new Earth with liquid seas, an atmosphere to protect humans from radiation, and by realizing the necessary elements to provide humans with oxygen, such as a pleasant temperature to live in. In the future it is certainly possible to live on Mars, and maybe even get married on Mars!

The planet Mars can be seen with the naked eye, but we recommend that you use binoculars or a telescope so that you can see all the details!

The planet Mars is very noticeable in the night sky because of its red glow. The magnitude of Mars is about -2.94. The only planet more visible than Mars is Venus, and of course our Moon and the Sun. However, there are a number of factors that play an important role when you want to view the planet Mars, such as the presence of light pollution and the weather.

Another factor is that the planet Mars is sometimes in opposition. This means that the planet is opposite the Sun, with the Earth in between. This means that Mars is closer to the Earth than it usually is, therefore this makes Mars more visible! This happens once every 2 years. The last time Mars was in opposition was on October 13, 2020, with Mars being approximately 63 million kilometers from Earth.

The planet Mars is full of surprises!

In this blog, we introduced you to our planet Mars, the fourth planet of our solar system measured from the sun. We’ve told you what Mars looks like, with its beautiful red glow. We also explained to you how the days, years and seasons on Mars work and how you can best see Mars from Earth. Are you ready to test your knowledge of Mars? This is possible! Travel through our solar system and view our stars and planets with the OSR Star Finder App!