While we were all tucked safely in our beds with visions of sugar plums dancing through our heads, a large asteroid was flying by Earth on December 24th.

Asteroid 2003 SD220 flew right past Earth Christmas Eve at a distance of 6.8 million miles (11 million kilometers). And thanks to the Deep Space Network’s 230-foot (70 meter) antenna at Goldstone California, NASA Scientists were able to generate the highest-resolution images to date. 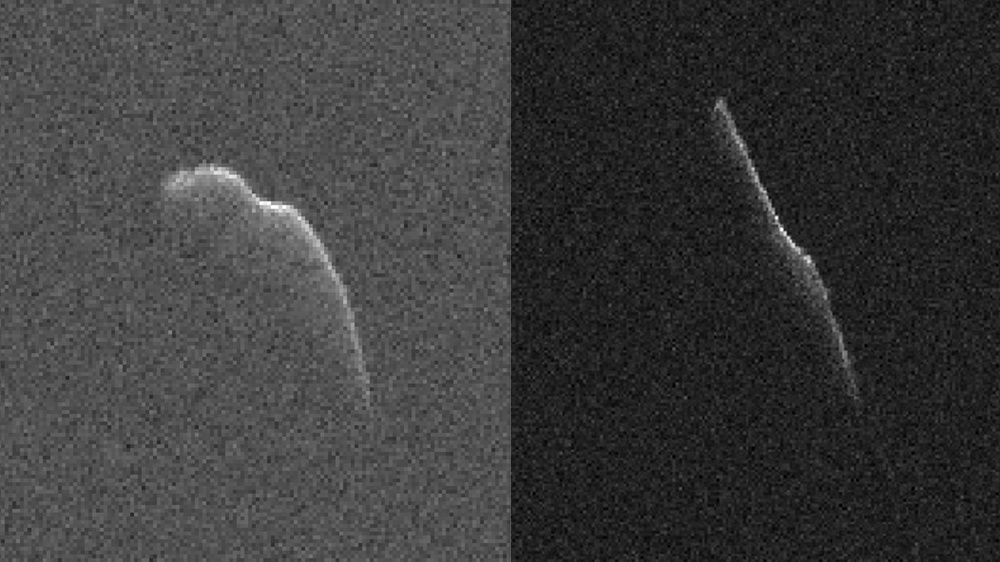 Although, a bit grainy, these radar images captured the oddly-shaped asteroid between December 17th and December 22nd, when this near-Earth object (NEO) was narrowing from 7.3 million miles (12 million kilometers) to almost the flyby distance.

According to lead asteroid radar researcher at NASA, Lance Benner, he says in a statement;

“The radar images data suggest that asteroid 2003 SD220 is highly elongated and at least 3,600 feet [1,100 meters] in length. The data acquired during this pass of the asteroid will help us plan for radar imaging during its upcoming closer approach in 2018.”

Yes! This asteroid is on track to pass by Earth once again in three years, but next time it will be even closer at a distance of 1.8 million miles (2.8 million kilometers). The 2018 flyby will be the closest the asteroid will get to Earth until 2070, when it is predicted to make another pass around at a safe distance of about 1.7 million miles (2.7 million kilometers).

Paul Chodas (manager of NASA’s Center for NEO studies) remarked that Santa and his reindeer were never in danger of colliding with this space rock as it was about 28 times the distance between Earth and the moon away.

Radar has been used to observe hundreds of asteroids and is indeed a powerful technique to learn more about these ancient rocks such as their sizes, shapes, rotation, surface features and roughness.  In addition, it is also improving the calculation of their orbit so Scientists can better predict the distance they are travelling from Earth.

Check out these amazing facts about asteroids!

Although, Hollywood as made asteroids hitting the Earth into blockbuster movies, we can rest assured that Scientists and research technology is constantly on the lookout for any rogue space rocks that may slip into our orbit. If this were ever to happen, plans are put into place on ways to blast it out of the sky to continue to keep us safely tucked into our beds.