Planet Earth may be familiar with you already. But did you know the outer core of the planet causes a magnetic field? Read more about the Earth and its facts in this blog!

Of course, planet Earth is already somewhat familiar to us. Because we live on it, we naturally know a lot about this planet. Still there is much to discover. In this blog we share some stellar  facts with you about our planet Earth. Ready? Let’s get to it!

Our Earth is also known as the ‘blue planet’. The Earth has this nickname because it consists of up to 71% water. Not only does this make the planet appear blue, but also makes it very unique. No other planet contains such large quantities of liquid water!

In addition to water, the Earth has continents and islands. The Earth’s crust consists of tectonic plates which can be found underneath the layer of water and soil. The movement of these plates causes the formation of mountains and valleys, and also the formation of volcanoes and volcanism. This phenomenon is known as plate tectonics.

The Earth is the only planet with plate tectonics. Other rocky planets in our solar system (such as Mercury, Venus and Mars) have never had movement in their outer shells. However, in 2014, it was discovered that Jupiter’s moon Europa does in fact have tectonic activity. Instead of soil, this activity takes place with ice plates, which in turn creates ice volcanoes.

Underneath Earth’s mantle there is a liquid outer core and a solid inner core. The outer core is responsible for generating the Earth’s magnetic field. This field is caused by several magnetic substances in the core. One can compare the Earth to a large magnet. As a magnet, the Earth has two ends: the North and South pole. We should be grateful for this magnetic field since it protects us, and all life on Earth, against solar wind and cosmic rays.

Did you know the creation of the compass is based on Earth’s magnetic field?

The Earth is shaped like a sphere with some flattening edges at its poles. The roundness of the Earth was speculated by philosophers such as Pythagoras and Aristotle years ago. The discovery was caused by the astronomical event of a lunar eclipse. During this event, the shadow of the Earth on the Moon appeared circular and the philosophers then concluded the Earth is round! 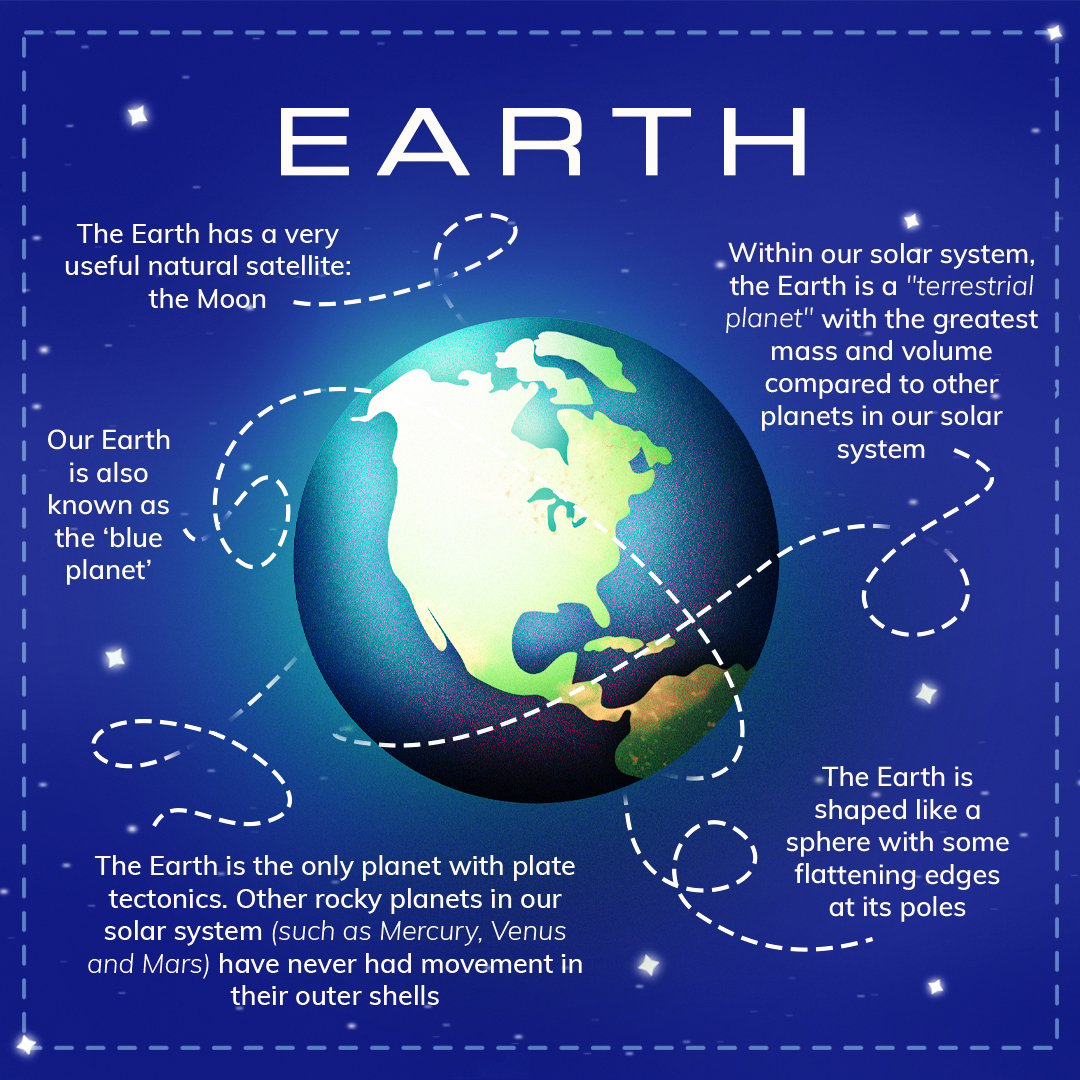 The planet Earth in our Milky Way

The Earth revolves around its axis and around the Sun. Both rotate in the same direction (counterclockwise when viewed from the North Pole). During the time Earth orbits the Sun, the Earth has already rotated 366.26 times on its own axis. A complete circle around the Sun takes one day less: 365.26 days. This is also known as one calendar year.

The location of the Earth in comparison to other astronomical objects

The Earth has a very useful natural satellite: the Moon. The theory is that the Moon formed just after the formation of the Earth. Our Moon greatly influences life on Earth. It causes the tides in the oceans, stabilizes the tilt of the Earth’s axis and causes the Earth’s rotational speed to drop around its own axis. In addition, the Moon also catches meteorites that could otherwise hit the Earth.

Besides the Moon, the Earth also has company from other planets. Planet Earth’s closest neighbours are the planet Venus and the planet Mars. In addition, the planet Jupiter has protected the Earth from impacts throughout its existence. Jupiter has a larger gravitational field, which causes asteroids and comets to end up on Jupiter.

As you very well know, water is necessary for the existence of life. It is not surprising there is indeed life on Earth (we live there after all)! Humans are not the only ones here though, there are millions of organisms living on this planet.

Did you know Earth is the only planet known to contain life?

Research indicates the Earth formed about 4.57 billion years ago and life emerged after 1 billion years. Due to the appearance of life on Earth, the atmosphere has become oxygenated. This has created an ozone layer, which protects the Earth’s surface from ultraviolet radiation. As a result, it is possible for us to live on this planet! It is estimated about 107.5 billion people have been born on planet Earth since the start of human existence.

The view from Earth

There is plenty to see from Earth! Depending on the cycle of the Moon, our “natural satellite” can almost always be spotted in the night sky. In addition, countless stars illuminate our sky! During the day we are warmed by the Sun, which is also visible on a clear day.

Although the Sun is about 400 times bigger than the Moon, both appear about the same size when viewed from the surface of the Earth. This is because the Sun is also 400 times as far away from the Earth as the Moon. In turn, this makes it possible to observe both a total and a partial solar eclipses on Earth!

At night, there is plenty to see in Earth’s night sky! Because the Earth rotates counterclockwise, other celestial bodies such as stars, planets, but also the Sun and the Moon rise in the East and set in the West. Have you ever seen “shooting stars” or attempted to find our neighboring planets in the night sky?

The Earth is full of surprises!

In this blog we have shared a number of facts about the Earth with you. Although this planet may be known to many, there are still many facts to share with you! Curious about everything that revolves around the Earth? Take a look at our universe with the OSR Star Finder App. You can also use this app to find your own star in the night sky. Don’t have your own star yet?