Have you ever traveled in an airplane and looked down upon the Earth? Did you see things that made you wonder what they were? Archeologists want to discover what lies beneath the Earth by using satellites. Read on to learn more about using satellites to discover ancient artifacts.

Scientists use satellites for communication, navigation, and weather data. Governments around the world collect data from satellites to help the military combat terrorism in their country. Having an aerial view of the Earth from space may now help archeologists find lost cities and artifacts lost to the overgrowth of terrain over thousands of years.

Satellite archaeology, an emerging field of archaeology, uses high resolution satellites with thermal and infrared capabilities. This allows researchers to pinpoint potential sites of interest in the earth around a meter deep. The infrared light used by these satellites has longer wavelengths than that of visible light. Visible light, microwave and thermal imaging devices pointed at the Earth capture data with a range of high resolution cameras and other receptors. With these devices buried sites, not visible on the surface, come to life for archaeologists to study.

Landscape features include soil, vegetation and man made structures. These satellites can make a 3D image of the area to show if any man-made structures exist beneath soil and vegetation. More often than not, these images cannot be seen by the naked eye.

Archeologist Sarah Parcak, a professor at The University of Alabama at Birmingham, has found more than 3,000 ancient settlements in Egypt. Her findings, using satellite technology, include Roman sites across Europe and North Africa. Each success pushes Sarah to continue exploring the Earth from space. While researching the Vikings, Sarah discovered buildings and artifacts hidden from plain sight.

Sarah’s new website, now makes it possible for everyone to look for ancient sites through her new project: GlobalXplorer. It’s a website that invites armchair explorers to flip through satellite images of Peru. By scanning “tiles” of the ground, users can identify and flag telltale signs of looting activity, or unusual features, that could represent an undiscovered structure. Since it started in January, people have examined more than 11 million photos and may have found thousands of unknown sites. With only 22% of the Earth’s surface researched archeologists race against destruction of sites and looting. 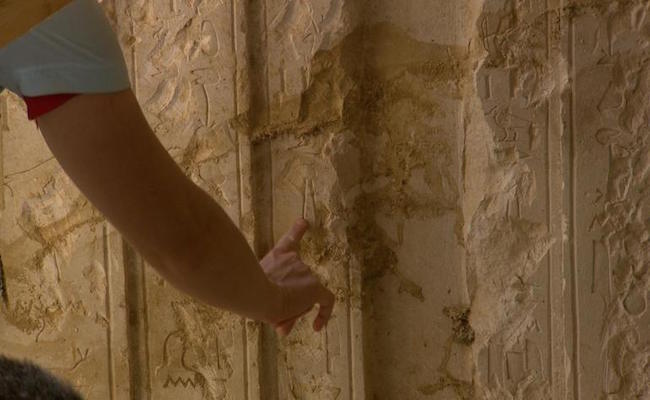 An alcove at the back of the tomb has a stone tablet with the name Intef. CBS NEWS

Archeologists also utilize the satellites photos in hard to reach areas around the world. Sites in Guatemala, covered by dense jungle environments, make it difficult to reach. With satellite images, researches have uncovered sites in the Arabian Peninsula and Peru, allowing the collection of ancient artifacts and revealing the movement of ancient peoples. In Egypt, the satellite imaging shows archeologists holes in the Earth where looting has occurred.

When trying to research an area, Sarah depends on imaging colors. Vegetation appearing orange instead of green tells Sarah that something is amiss in that area. With previous research, she knows that rocks may hinder the proper growth of the plants. After digging out the area, the archeologists often find a brick wall or stone structure. Each new find allows archeologists to improve their collection of data.

With the help of satellite technology, the discovery of ancient sites will increase going forward. This will be interesting to see what else they discover lying beneath the Earth’s surface.