Even though we demoted Pluto from a planet to a dwarf planet and kicked it off the Solar System charts, its latest pics taken by New Horizons spacecraft has the scientific community and sky gazers alike all very excited.

With the newest images of Pluto coming in from New Horizons spacecraft, scientists are working to determine what they all mean, and their initial results are quite exciting. Pluto’s terrain appears to contain mountain-like icebergs, wind-blown dunes and ice-carved valleys.

The heart-shaped area on Pluto (the Tombaugh region) has revealed a mountain range similar in height to the Appalachians here on Earth. These new-found formations are estimated to be 1.5 kilometers in height (0.9 miles).

In a statement made by Jeff Moore, lead New Horizons Geology, Geophysics and Imagining team, we gain a better understanding of this mountain range. He said;

“The randomly jumbled mountains might be huge blocks of hard water ice floating within a vast, denser, softer deposit of frozen nitrogen within the region informally named Sputnik Planum.”

With New Horizons closest approach to Pluto at 80,000 kilometers (50,000 miles) away, it has also revealed more surprises. 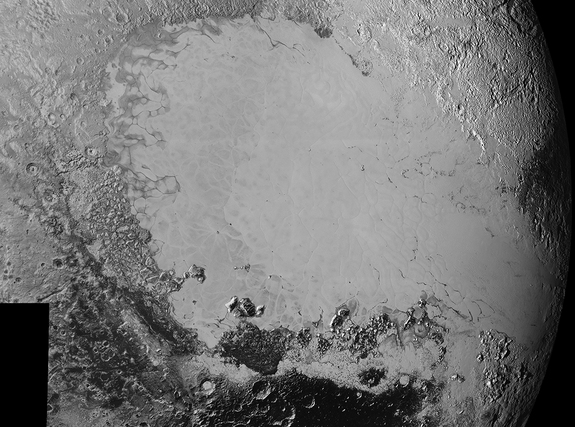 “Seeing dunes on Pluto would be completely wild…”

According to William B.McKinnon (a GGI deputy lead from Washington University of St. Louis)
dunes on this dwarf planet would be a complete surprise since its thin atmosphere is not conducive to producing winds; however the images coming in do appear to be dune-like in nature. In addition, nearby these “dunes” are smooth, white plains that span about 400 kilometers (248 miles) across. And like the mountains these plains are also located in the bright, heart-shaped region and are estimated to be relatively young at 100 million years-old. In the images sent back, the plains appear to have smooth hills and fields of small pits, but no craters. Scientists theorize this may be largely due to some internal heating below Pluto’s surface such as volcanoes or geysers.

The chaotic surface of Pluto is not the only thing that Hew Horizons has uncovered, it has also shown this dwarf planet to have a “surprising” atmosphere. According to a statement made by Michael Summers, a New Horizons co-investigator (based at George Mason University in Fairfax, Virginia) the new images sent back have brought tears to the atmospheric scientist’s eyes. He stated;

“This is one of our first images of Pluto’s atmosphere. [It] stunned the encounter team. For 25 years, we’ve known that Pluto has an atmosphere. But it’s been known by numbers. This is our first picture. This is the first time we’ve really seen it.”

According to researchers they once thought Pluto’s upper layers were too warm to create a haze; however, there is a haze and scientists believe it may be created by particles that eventually fall to the surface (giving Pluto its reddish hue). In addition, it has also been discovered this haze extends well above the planet (more than 160 kilometers or 100 miles). That’s five times what was once predicted.

“We’re going to need some new ideas to figure out what’s going on,” Summers said in a statement from NASA.

As New Horizons moves on to its next location it will continue to send back images of Pluto and its moons. What comes next we can only wait and see, but until then keep your eyes to the night sky and behold all the wonders and mysteries that lie above.