What are the plans for the future of the Arecibo Radio Telescope?

On December 1st, 2020, the famous Arecibo Radio Telescope crashed to the Earth in an event described as catastrophic. What caused the collapse of the giant telescope?

Months earlier, an 8-centimeter-thick steel cable, one of 18 suspending a 900-ton instrument platform high above the dish, had pulled out of its socket at one end and fallen, slicing into the dish. A second support cable snapped 3 months later, on 6 November. December 1st, the weight of the structure snapped the final support cables.

Prior to the collapse, the decades-old telescope still provided astronomers an opportunity to study space. Its powerful radar could bounce radio waves off other planets and asteroids. Furthermore, antennas could heat the plasma in Earth’s upper atmosphere, creating artificial aurorae for study. 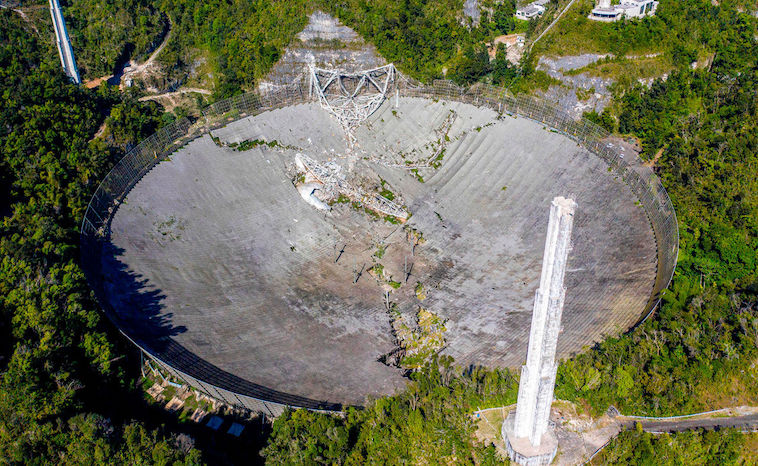 Questions arose as to the cause of the collapse. Blame shifted from poor construction to lack of maintenance funds. Some blamed it on the fact that money was moved away from Arecibo to other newer telescopes.

“Somehow, we lost a $300 million instrument, a magnificent, costly instrument, for a few million dollars,” says Richard Behnke, an Arecibo staffer from 1970 to 1982 who went on to head the geospace science division at NSF. “Things should not collapse like that. It’s not acceptable stewardship at all.”

However, in 1997 engineers added the igloo-shaped “Gregorian dome.” This housed additional reflectors to focus the radio waves to a point where detectors and transmitters covering many frequencies could be mounted. “It became a completely different telescope and enabled it to stay on the cutting edge,” says Robert Kerr, who was observatory director for two spells in the past 15 years.”

Yet, the weight of the dome contributed to the strain on the cables. The cables should have had a safety factor of 6 and instead only had 2. When the first cable snapped, engineers were brought in to assess the situation. They looked at reports concerning the construction of the cables from the 1980s. What they found certainly caused alarm. The 1980 reports stated that the plugs holding the cables were faulty in their design.

Astronomers and researchers have proposed a $400 million telescope on the same site. They propose the following:

The steerable platform would enable it to see more than twice as much of the sky as its predecessor. Furthermore, the field of view of its 1000 dishes would cover a swath 500 times larger.

While many believe this would make a wonderful replacement, others are skeptical. They have concerns over the approval of securing the money needed to make the new telescope. Some have suggested raising funds privately. At this time, the idea is still on paper while it awaits funding.