What Happened to the Dinosaurs?

It has long been speculated that an asteroid impact caused the extinction of the dinosaurs. Researchers believe they now have the evidence.

Scientists work to answer many of the mysteries in life. Who made the Nazca lines and why? How did the ancient Egyptians build the pyramids without cranes? What caused the dinosaurs to go extinct. Most theories surrounding dinosaur extinction comes from the idea that an asteroid hit the Earth. However, most of these theories take years and sometimes decades to prove. Did a massive asteroid impact in the Gulf of Mexico cause the dinosaurs to go extinct? Scientists believe they have proved their theory.

The Chicxulub crater is an impact crater buried underneath the Yucatán Peninsula in Mexico. Its center is located offshore near the town of Chicxulub, hence the name for the crater. It was formed when a large asteroid or comet about 11 to 81 kilometers in diameter, known as the Chicxulub impactor, struck the Earth.

Many years back, researchers found layers of asteroid dust around the Earth. At that time, they theorized that this caused the death of many of the land dinosaurs. However, they could not link the Chicxulub Crater to that event. A new study released in the latest issue of  Science Advances claims that researchers have matched the chemical makeup of asteroid dust found in the crater. Furthermore, the dust matches the exact time of the extinction of the dinosaurs. 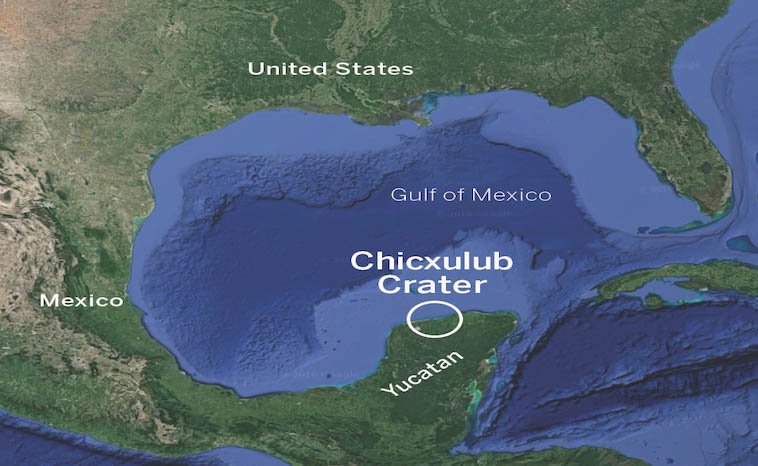 The telltale sign of asteroid dust is the element iridium. Decades ago, researchers found iridium in the geologic layer found all over the world. This finding created the asteroid hypothesis. In the new study, researchers found iridium in a section of rock pulled from within the crater. Researchers believe the sediment layer deposited in the days to years after the strike. It is so thick that they precisely dated the dust to within two decades after impact. Furthermore, the highest concentrations of iridium were found within a 5-centimeter section of the rock core retrieved from the top of the crater’s peak ring.

Labs in Austria, Belgium, Japan, and the United States carried out the iridium research.

“We combined the results from four independent laboratories around the world to make sure we got this right,” said Sean Gulick, co-author of the study. In addition to iridium, the crater section showed elevated levels of other elements associated with asteroid material. The concentration and composition of these “asteroid elements” resembled measurements taken from the geologic layer at 52 sites worldwide. (Science Advances, 2021)

End of the Dinosaurs

How would an asteroid event destroy the dinosaurs? Simply put, the impact would have kicked up an incredible amount of dust and debris when the asteroid vaporized upon impact. All of that dust would have floated for decades, blocking out the light from the Sun. As a result, changing temperatures of the planet ultimately affected plant growth.

As parts of the planet began to change and experience mass plant die-off rapidly, herbivores would have been severely impacted. Furthermore, the carnivores that hunted them would have also found themselves hungry and dying as well.

“If you’re actually going to put a clock on extinction 66 million years ago, you could easily make an argument that it all happened within a couple of decades, which is basically how long it takes for everything to starve to death,” said Sean Gulick. Researchers plan to conduct further investigations into the extinction of the dinosaurs.