We all probably know the nursery rhyme; twinkle, twinkle little star, how we wonder what you are...

Well today we know the twinkling object in the night sky is indeed coming from a star and not a planet.

Why do stars appear to be twinkling and planets don’t? The answer is actually quite simple; it all boils down to our atmosphere.

The distance of most stars in the sky are so far away from Earth that even through a telescope they will appear as only small pinpoints. For this reason it’s very easy for our atmosphere to disturb the light coming from the star. You see the light from a star pierces Earth’s atmosphere and its light is refracted (causes it to change directions) slightly. This is due to the various temperature and density layers in Earth’s atmosphere. Think of the star’s light traveling in a zigzag motion to our eyes, rather than in a straight path if Earth did not possess an atmosphere. This causes a twinkly effect or “stellar scintillation.”

Planets are closer to Earth and therefore appear not as pinpoints, but as tiny disks in our sky (look through a telescope and you will see the disk-shape of a planet). The light from these little disks or planets is also refracted by the atmosphere, but as it travels toward us one edge of a planet’s disk might be forced to “zig” one way, while the opposite edge might be “zagging” in an opposite way.  All this zigging and zagging will eventually cancel each other out so the planet’s light will appear to shine more steadily.

Although, the above explanations are true for most stars and planets, there are a couple of exceptions;

Sirius is the brightest star in the night sky and one of the closest at only 8.5 light-years away. It is so brilliant that it is easy to spot with the naked eye; just look to Canis Major (to the left and below Orion). Sirius is also known as the “Dog Star” and it can actually shine red, green or blue depending on the atmosphere here on Earth. 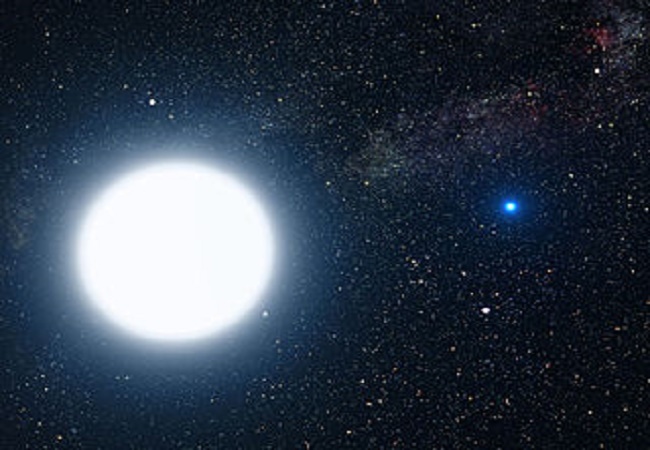 Artist’s rendition of Sirius A and Sirius B (smaller star)

More Sirius Facts ~ Did You Know..

…this star system is around 300 million years-old?

…Sirius B is hotter than Sirius A burning at a whopping temperature of 25,200 Kelvins?

…the Sirius system is gradually moving closer to the Solar System, which would result in its increased brightness in the next 60,000 years?

…Sirius is so bright that it can even be observed under stark daylight with the naked eye?  The conditions have to have a clear sky and the observer must be at a high altitude, and the Sun needs to be at the horizon.

…Sirius is also one of the 27 stars on the Brazil flag, and depicts the state of Mato Grosso.

Now that we have uncovered the truth about those twinkling stars, you can be sure of what you observing in the night sky. Take out your telescope tonight and take a look to the heavens. You never know what you might just find lurking about!