It’s been over 10 years now since Huygens – a flattened cylinder-shaped probe filled with sensors and cameras – hurtled through the atmosphere of Saturn’s moon, Titan and landed on its mysterious surface. The exciting discoveries have thrilled the scientific community and astronomers (both professional and novice) alike.

Before Huygens touchdown on January 14th, 2005, Titan was still an undiscovered wonder that we could only hope to explore someday, but with the advent of modern technology, the 318 kilogram (701 pound) probe would be the first to explore this strange new world of our solar system’s second biggest and Saturn’s largest moon.

The Terrain of Titan

Huygen spent 72 minutes snapping photos of Titan and sending them back to its relaying station, Cassini before its batteries died and the station drifted over the horizon, but what those 72 minutes revealed would forever change the perceptions of this isolated wonder.

Lead scientist, John Zarnecki of the probe’s Surface Science Package (one of the six instrument suites onboard the probe) said,

“We didn’t know what we would land on, whether it would be solid ice as hard as granite or a liquid sea.” 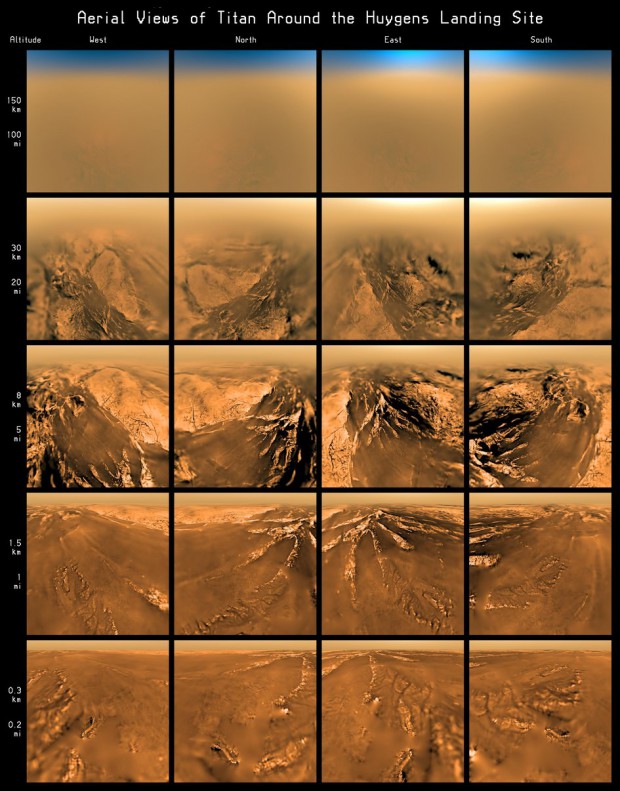 Aerial views of Huygens’ landing site, taken by the probe as it floated down through Titan’s atmosphere. Image: ESA/NASA/JPL/University of Arizona.

However, the mystery was soon solved as the pictures revealed the probe most likely landed on a dried-up seasonal lake or a floodplain. Scientists believe Huygen may have hit a round pebble upon landing which would indicate liquid flowing over rocks, or in Titan’s surface case, rock-hard chunks of ice. This probably occurred within the last 10 to 15 years

Zarnecki is thrilled with the results and says,“Cassini and Huygens have done a fantastic job showing what a varied place Titan is.”

But he is also a bit disappointed and goes on to reveal, “in some ways it is incredibly frustrating because although the mission has been an enormous success, we have just got to go back and do a lot more stuff because Cassini has shown how varied the surface is. There are dunes, cryo-volcanoes, river systems, lakes. Titan has absolutely lived up to the hype.”

Although, Huygen is no longer cruising the surface of Titan, Cassini spacecraft continues to send back some astounding data of Saturn’s biggest moon.

NASA’s Cassini has spotted some impressive “seas” and “lakes” through its radar imaging technology. These bodies of liquid are estimated to span several hundred meters/miles wide and several more deep. However, due to Titan’s massively frigid temperatures (-292 degrees Fahrenheit or -180 degrees Celsius) these depression are thought to contain liquid methane and ethane. These chemicals are more prevalent around Titan’s poles in larger pools that appear to be branching off and feeding smaller channels. However, since Titan has a 30 plus year seasonal calendar with Saturn, some of these lakes and seas are drying up.

Does Earth Hold the Answer?

To better understand what may be happening on Titan, scientists are turning back to Earth’s own Karst landforms (how water is drained through the ground) for the answer.

In a study led by Thomas Cornet of the European Space Agency it was estimated how long it would take for hydrocarbon (Titan’s main liquid element) to dissolve under the specific conditions on Saturn’s moon. The discovery?

They estimated it would take about 50 million years to create a 300 foot (100 meter) “canyon” with this kind of erosion taking place, which interestingly enough, is about the same age as Titan itself.

Cornet explains, “We compared the erosion rates of organics in liquid hydrocarbons on Titan with those of carbonate and evaporate minerals in liquid water on Earth. We found that the dissolution process occurs on Titan some 30 times slower than on Earth due to the longer length of Titan’s year and the fact it only rains during Titan summer. Nonetheless, we believe that dissolution is a major cause of landscape evolution on Titan and could be the origin of its lakes.”

Of course, there is always room for error, but scientists working on Titan’s terrain are confident their theories are sound.

What’s next for Titan? Time will only tell. Until then keep your eyes to the sky and behold the wonders that lie above.