The Heracles Galaxy Within the Milky Way

Researchers believe that our Milky Way galaxy collided about 10 billion years ago with another galaxy called Heracles. Read on to learn more about this new discovery.

A recent article in the November issue of Monthly Notices of the Royal Astronomical Society asserts that a “fossil galaxy” has remained hidden within our own Milky Way. Astronomers named it Heracles, after the ancient Greek hero who received the gift of immortality when the Milky Way was created. Data came from the Sloan Digital Sky Surveys’ Apache Point Observatory Galactic Evolution Experiment (APOGEE) helped them in their study.

The Sloan Digital Sky Surveys’ APOGEE in New Mexico has a  mission to chart a historical archeological record of the Milky Way. Over the last ten years, the Sloan Digital Sky Survey has created the most detailed three-dimensional maps of the Universe ever made. It has included deep multi-color images of one-third of the sky and spectra for more than three million astronomical objects. Researches use the observatory to study the motions and chemical compositions of the stars in the Milky Way. During this process, they discovered Heracles.  How did researchers discover Heracles? They found that certain stars had different chemical compositions than those around them.

According to Danny Horta from Liverpool John Moores University in the United Kingdom, finding these stars was nearly impossible. However, the APOGEE allowed them to peer through dust and debris hiding the galaxy.

“To find a fossil galaxy like this one, we had to look at the detailed chemical makeup and motions of tens of thousands of stars. That is especially hard to do for stars in the center of the Milky Way. That is because they are hidden from view by clouds of interstellar dust. APOGEE lets us pierce through that dust and see deeper into the heart of the Milky Way than ever before.”

Ten-Year Study of the Milky Way

A ten-year study has resulted in the discovery of these stars. APOGEE has measured spectra for more than half a million stars all across the Milky Way. How? It does this by focusing on near-infrared light.

Horta explains that it took looking at thousands of stars to find the stars from Heracles.

“Of the tens of thousands of stars we looked at, a few hundred had strikingly different chemical compositions and velocities,” Horta said. “These stars are so different that they could only have come from another galaxy. By studying them in detail, we could trace out the precise location and history of this fossil galaxy.” 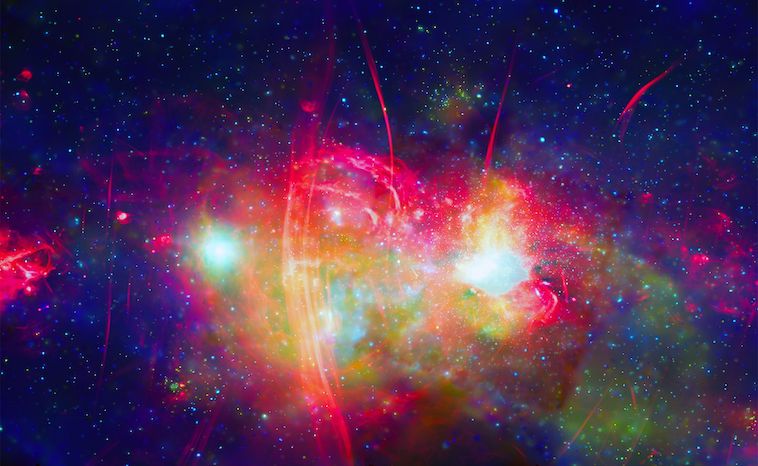 This NASA photo shows the center of the Milky Way Galaxy. The Heracles Galaxy is located within this area.

The Milky Way Galaxy’s spiral design helped them in their discovery. Most galaxies as old as Heracles have their remains dispersed into the galaxy’s outer rings that consumed them. Researchers suspect the Heracles collision into the Milky Way was different than most.

Why? They believe the ancient stars lie buried within the disc and bulge of the Milky Way halo. The outer halo of the Milky Way has a huge but very sparse cloud of stars enveloping the main galaxy. By their calculations, the remnants of Heracles account for about one-third of the stars inside the halo.

Researchers once thought that spiral galaxies had calm beginnings. As time passed, the spiral arms stretched outward into space. However, the fourth phase of the Sloan Digital Sky Survey has found that the collision was a major event forming the Milky Way galaxy.

The Sloan Digital Sky Survey now moves into the fifth phase of mapping the universe.

Name a star as thoughtful coronavisrus gift for anyone who needs support du...