We have probably all seen pictures of our big blue marble from space and of our moon, but this unique picture taken by one of NASA’s space camera’s is truly a wonder to behold.

The image of the moon passing in front of the sunlit Earth was captured by the Deep Space Climate Observatory or DSCOVR last month and gives us a sneak peek of the dark side of the moon – a view never seen from Earth and rarely from space.

The Mission of the Deep Space Climate Observatory

DSCOVR was launched earlier this year (2015) and is set to orbit between the Earth and the Sun, about one million miles into space. Here it will monitor the Earth providing us with advanced warnings of solar winds (particles and magnetic fields) emitted by the Sun, which can affect our communication systems, power grids and even the satellites orbiting close to our planet. In addition, DSCOVR will also measure the radiation reflected and emitted by Earth as well as sending back pictures of the sunlit side of our planet.

From space DSCOVR will give us a 15 to 60 minute warning time before the surge of particles and magnetic field – this is known as a coronal mass ejection (or CME) – which is associated with a geomagnetic storm. This device will also be used to improve predictions of geomagnetic storm impact locations. Without this early warning system in place our economic and national securities are at risk. 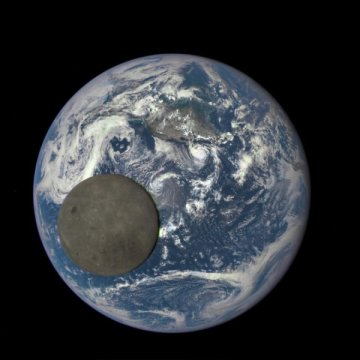 This image shows the far side of the moon, illuminated by the sun, as it crosses between the DSCOVR spacecraft’s Earth Polychromatic Imaging Camera (EPIC) camera and telescope and the Earth.
Credit: NASA/NOAA

The Imaging System at Work

Unlike the “simple” cameras we have on our phones, DSCOVR is equipped with a four megapixel CCD camera and telescope called, EPIC (Earth Polychromatic Imaging Camera). This scientific marvel is conducting real-time solar wind monitoring for the National Oceanic and Atmospheric Administration (NOAA).

EPIC is designed to keep a constant watch on our sunlit Earth as it rotates in space. From here it will send back scientific data about the ozone, cloud height, vegetation and even aerosols in the atmosphere. EPIC is also providing us with a series of Earth images like this one of the dark side of the moon.

The Dark Side of the Moon

Also called “the far side of the moon,” this dark region never shows its face to us here on Earth as the moon is “tidally locked” to our planet. This means its orbital period is the same as its rotation around its axis.

The dark side of the moon was a mystery until the first images were taken in 1959 by the Soviet Luna 2 spacecraft. Since then, NASA has imaged the moon’s “backside” in great detail. Check out what they found;

Did you know no one has ever walked on the far side of the moon?

With so much technology at our fingertips, who knows what other space marvels are yet to be discovered? Until then keep your eyes and telescopes pointed towards the night sky and tuned into our blog for more astronomy news, pictures and star-studded fun.