We are probably all familiar with the old saying; “once in a blue moon.” Like other folks, I have often wondered where this odd saying originated. Since tonight (Friday July 31st) is actually the occurrence of a “blue” moon let’s explore this “rarity.”

I was disappointed to learn that tonight’s full moon won’t actually take on a blue-hue. The moon will be a luminous round orb, shining in its full glory tonight (as it always does in this phase) but blue it will not be. So what’s all the fuss about? Even though there will not be a color change, tonight will be the second full moon of this month, as the lunar month completes itself every 29.5 days. Once in a blue moon rare? Not quite as this happens every 2.7 years.

It was an amateur astronomer by the name of James Hugh Pruett in 1946 that gave us this misunderstanding of the blue moon. He wrote an article for the magazine Sky and Telescope where he stated a blue moon was the second full moon that fell in the same month. This is incorrect. Technically a blue moon is a natural phenomenon that occurs from the ashes of a volcanic eruption or even a forest fire. The plumes of scattered particles block out the red light of the moon’s normal spectrum, allowing only the blue light to get through. The last true Blue Moon occurred from the eruption of Krakatoa in 1883, which tinged the moon blue for almost two full years…now that is worthy of the saying, “once in a blue moon.” 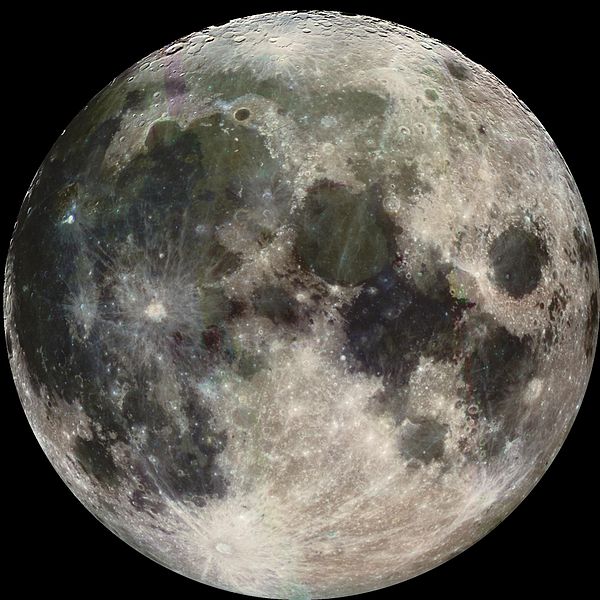 A Moon By Any Other Name…

You have probably heard of the “harvest moon.” This is the name of the late September/early October moon said to allow farmers to work into the night hours due to its brightness; however according to the Native American Algonquin folks, all full moons have names. Check them out;

More Moon Facts ~ Did You Know?

The moon controls the Earth’s tides? The gravitational pull of the moon causes two bulges in the seas; one facing the moon and one opposite. As the Earth rotates these bulges cause the tides to rise and fall (high and low tides).

The Moon is drifting away from the Earth? Eventually the moon will take 47 days (rather than 27.3 days) to orbit the Earth. This is because the moon moves away about 3.8 cm each year and will continue to do so for the next 50 billion years.

Your Moon weight is less than your Earth weight? If you hate your weight on Earth there’s good news, on the moon you would weigh about one-sixth your body weight. This is because there is less gravity on the moon.

Only 12 American males have ever walked on the moon? No woman has ever set foot on the moon, only men and unmanned vehicles.

The moon has no atmosphere? The moon’s surface is not protected from meteorites, solar winds, cosmic rays or temperature fluctuations. It also means there’s no sound up there and the sky is always black.

The moon has quakes? Scientists believe the moon may have a molten core, just like the Earth as seismographs used by astronauts showed small moonquakes occurring several kilometers beneath the moon’s surface.

Man will walk on the moon again? If everything goes according to plan, NASA plans to return astronauts to the moon to set up a permanent space station in 2019.

USA considered detonating a nuclear bomb on the Moon during the 1950’s? During the height of the cold war, a secret project known as “A Study of Lunar Research Flights” or “Project A119″ was meant to show strength at a time when the United States was lagging behind in the space race.

For all the facts we have there is always some myths and superstitions that follow after it. Here are some wacky ideas our ancestors and some folks still believe today;

If you are a followers of the Farmer’s Almanac, it states to never point at a new moon or look at any moon over your shoulder, it’s bad luck.

~ A full moon on a Monday brings good luck and great weather..

~ Chinese legends tells of the man in the moon as being the matchmaker of couples, in which no one can separate.

~ In Greek mythology, Artemis is the goddess of the moon

~ The Inuits believe in a moon god called Annigan. He chases his sister (the sun goddess) and as a result he forgets to eat. This causes him to lose weight and grow thinner throughout the month. When he grows so hungry he fills himself up (full moon) then resumes his quest to catch his sister.

~ In 1835 a hoax was formed that astronomers saw bat-like humanoids and other life on the moon.

Even though the full moon tonight won’t be changing color, nor is it exactly a rarity, take advantage of this brighter-than-usual night to gaze up at this magnificent orb and see it for the wonder it truly is.