STEVE appears as a ribbon of light that appears diagonally across the horizon. It can appear closer to the equator than a typical aurora and is often accompanied by jagged green points dancing beside it. The best part about STEVE is that it appears in lower latitudes. As a result, more people can see it’s the light show.

“It’s exciting because this might be a kind of aurora that more people can see than any other kind because when it shows up, it shows up over more populated areas that are further to the south,” said Elizabeth MacDonald, a researcher at NASA’s Goddard Space Flight Center in Maryland. 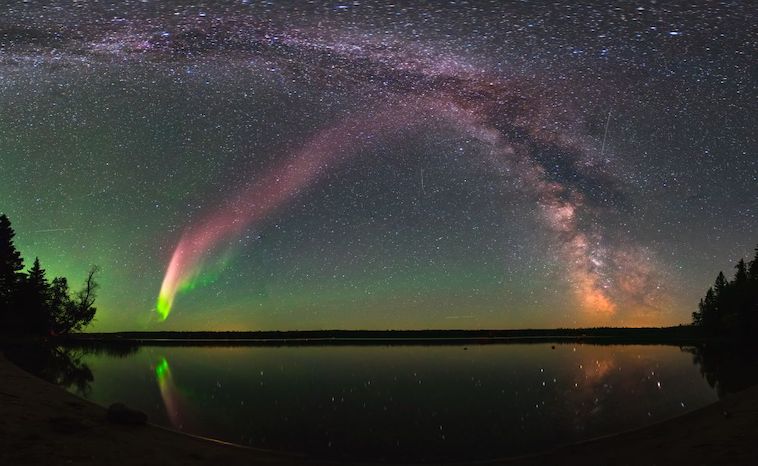 How do Auroras appear? As the solar wind approaches the Earth, it meets the Earth’s magnetic field. In the ionosphere, the solar wind ions collide with atoms of oxygen and nitrogen from the Earth’s atmosphere. The ionosphere is the level of Earth’s atmosphere that extends between 50 and 600 miles (80 to 1,000 kilometers) above Earth’s surface. The energy released during these collisions causes a colorful glowing halo around the pole. As a result, Auroras appear in the northern latitudes.

STEVE forms from hot, turbulent gases that show up independently of that solar weather. Researchers suspect that it may be the result of some native process in the ionosphere. They think that an ion drift may cause the formation.

“There’s an electric field in those regions that point poleward, and a magnetic field that points downward, and those two together create this strong drift to the west,” MacDonald said. The flow in Earth’s ionosphere pulls charged solar particles westward. As a result, they hit neutral particles along the way and heat them. The process produced upward-reaching streaks of light moving west.

That explains the rose-colored lights and the angular green lights that appear with Steve. However, a new report tries to explain the horizontal green streaks that also appear. These horizontal green light curve backward for about 20 to 30 seconds before vanishing from view. Why?  Researchers suggest the following as a possible explanation. “It’s likely that the turbulent particles within STEVE are colliding with and rapidly heating ambient oxygen, the team wrote, creating tiny green fires in the sky that trail below the picket fence as they slowly fizzle out.” (AGU 2020)

However, Elizabeth MacDonald says that these streaks may be the “tip of the iceberg.” “In finding these tiny little streaks, we may be learning something fundamentally new in how green auroral light can be produced,” says MacDonald.

Researchers have more work to do with STEVE. They encourage citizen scientists to continue to help them in their study and observation.