Is it possible to build a space elevator capable of transporting materials from Earth to launch into space? Read on to learn about space elevators and their potential use in the future.

Transporting materials into space is expensive. NASA and other space agencies spend thousands of dollars delivering a loaf of bread to the International Space Station. What if there was a way to transport these items without rocket-propelled spacecraft? The costs involved comes from the massive amounts of fuel needed to lift the spacecraft into space. The idea of space elevators has gained traction in the last several years. Not a new idea, as it was actually proposed in 1895, researchers believe they may have a way to make it work.

How would one go about building an elevator into space? Engineers have worked on that puzzle since 1895. Russian scientist Konstantin Tsiolkovsky considered building a tower that could reach 35,786 kilometers above the Earth. At this height, geostationary orbit exists. The International Space Station orbits at 350 kilometers.

In 1959 the Russian engineer Yuri N. Artsutanov suggested another idea. Artsutanov suggested using a geostationary satellite as the base from which to deploy the elevator downward. By using a counterweight, a cable would be lowered from geostationary orbit to the surface of Earth. Furthermore, the counterweight could extend from the satellite away from Earth. As a result, the cable would remain over the same spot on the surface of the Earth.

In 1975 an American scientist, Jerome Pearson, had an idea for a space elevator that tapered cables as they extended. For example, the completed cable would be thickest at the geostationary orbit, where the tension was greatest. However, it would narrow at the tips to reduce the amount of weight. 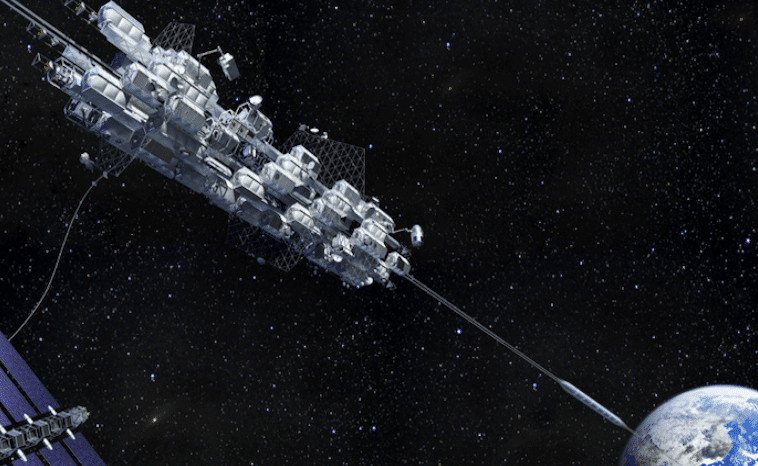 Engineer David Smitherman developed carbon nanotubes in the 1990s. These carbon fibers have the advantage of being lightweight but yet very strong. An American scientist, Bradley C. Edwards, suggested creating a 100,000 km (62,000 mi) long paper-thin ribbon using a carbon nanotube composite material. He figured that wide thin ribbons of carbon nanotubes could be woven into layers. As a result, this woven material could stand up to meteor impacts.  In addition, a ribbon cross-section shape has a larger surface area for climbers to climb with simple rollers.

Scientists working on the idea of space elevators have recently announced another idea. Zephyr Penoyre from the University of Cambridge in the UK and Emily Sandford at Columbia University in New York believe they have a better solution.

Instead of anchoring the cable on Earth, they propose anchoring it on the moon and dangling it toward Earth.

Anchoring to the Moon

Why? They suggest that centrifugal forces play a major role in space elevator development. A conventional space elevator would make a complete rotation every day, in line with Earth’s rotation. However, a moon-based spaceline would orbit just once a month. This would result in a much slower rate with correspondingly lower forces.

Furthermore,  the spaceline would pass through a region of space where terrestrial and lunar gravity cancels each other out. Previous research showing carbon nanotubes’ use showed that engineers could not produce a cable strong enough to support the elevator. However, this new research promotes the idea that carbon polymers like Zylon could support this cable.

Penoyre and Sandford suggest that a cable about the thickness of a pencil lead could be extended from the moon for less than a rocket-propelled transport craft.

“By extending a line, anchored on the moon, to deep within Earth’s gravity well, we can construct a stable, traversable cable allowing free movement from the vicinity of Earth to the Moon’s surface,” say Penoyre and Sandford. The savings would be huge. “It would reduce the fuel needed to reach the surface of the moon to a third of the current value,” they say.

Will space elevators replace cargo transports to the ISS? Will they help move us toward further space exploration? Time will tell.