When we think of a storm we most likely will conjure up an image of rolling black clouds, booming thunder and intermittent flashes of lightning, but these aren’t the only types of storms that can affect us here on Earth. In fact, solar storms from the Sun have been known to cause its own unique kind of trouble. Let’s delve into the realm of “stormy weather” on the Sun to discover what this natural phenomenon is all about.

What is a Solar Storm?

We tend to think of the Sun as a source of heat and light and we certainly do miss it when it fails to appear out from behind heavy cloud cover, but there’s so much more going on up there then we give credit to.

The Sun is actually a massive ball of molten gases that is always in flux and sometimes these fluctuations can churn up so violently that it produces a “storm” of eruptions. This mass and energy from the solar surface are producing solar flares.

What is a Solar Flare?

A Solar Flare is when energy is stored in “twisted” magnetic fields and is suddenly released in a tremendous explosion. It only takes a matter of minutes for this material to heat to millions of degrees and produce a burst of radiation across the electromagnetic spectrum, including x-rays, radio waves and gamma rays.

There are three classifications of Solar Flares according to their brightness;

So what does all this mean to us? Read on…

The Effects of Solar Storms

Scientists have every reason to believe these powerful storms on the Sun have been happening since its existence and therefore its effects on the Earth (whether perceived or not) has also been taking place. However, research assures us there is no harmful effects to living beings as long as we stay on the planet. This is due to Earth’s atmosphere that blankets and shields us from any excess radiation – thank goodness! But unfortunately the same cannot be said for those in space. 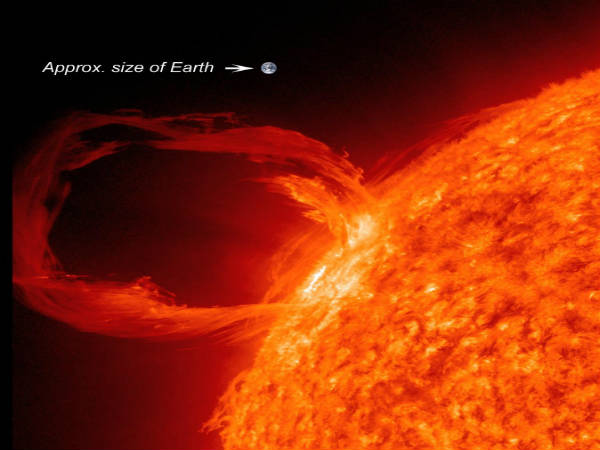 When a Solar Storm is brewing astronauts are the ones at the greatest risk from these high-energy particles, especially those carried by powerful coronal mass ejections (CMEs). These giant bubbles of gas and magnetic fields from the sun can contain up to a billion tons of charged particles which can then travel up to several million miles per hour. If this were to hit an unshielded astronaut (like those travelling to the moon) the large doses of radiation could be fatal. Luckily there are monitoring systems in place that can identify when these storms and flare may take place. On the other hand … solar storms can be dangerous to our technologies.

When a powerful CME strikes Earth’s atmosphere it causes a temporary “halt” in our magnetic field known as a Geomagnetic storm. When these charged particles slam into our atmosphere it will disrupt satellites in orbit (and even cause them to fail) cover high-flying airplanes with radiation, it can disrupt telecommunications and navigation systems and even has the potential to affect power grids (which have been known to blackout entire cities, even entire regions).

Twenty-six years-ago on March 13th, 1989 a powerful CME caused a huge power failure in Quebec, Canada as well as some parts of the Northeastern United States. This event cut off electricity to over 6 million people for approximately 9 hours!

However, this Solar storm had nothing on the record-breaking Solar Flare that took place on August 28th, 1859. Coined the Carrington Event by the man whom observed and recorded it, Richard C. Carrington, this CME traveled to Earth in a whopping 17 hours (rather than the usually 3 to 4 days). This geomagnetic storm produced not only widespread Aurorae, but also disrupted telegraph systems throughout Europe and North America. The Carrington Event is the largest solar storm on record.

Could this happen today?

With our advanced technologies there are always eyes watching the Sun from both Earth and space for any signs of a Solar Storm brewing. In addition, researchers and technicians are working on implementing tactics (like temporarily shutting down satellites and re-configuring power-grids with extra grounding) in case of a powerful geomagnetic storm.

Although, these Solar Storms can cause some damage, the Northern Lights still remain a ghostly and exciting wonder produced by the raging turmoil on our Sun. Enjoy it for its beauty, knowing there’s so much more going on up there than our eyes can see…