Whether it be a dissatisfaction with the Earth we are currently on, or an exit strategy in case our planet were to suddenly become uninhabitable, researchers are constantly on the lookout for “alien” planets that are similar to ours. And guess what they have found? There are almost 2,000 Earth-like planets that have been discovered since the first one in 1995, plus more than half of these were discovered by the Kepler Space Telescope.

So what makes a planet qualify as a “prototype” of Earth?

According to Space.com here is what astronomers look for in an Earth-2.0;

"To qualify as potentially life-friendly, a planet must be relatively small (and therefore rocky) and orbit in the “habitable zone” of its star, which is loosely defined as a location where water can exist in liquid form on a world’s surface." Other factors include the planet’s atmospheric composition and how active its parent star is.

Out of the estimated 2,000 Earth-like alien planets NASA has chosen 6 that are the closest to our home planet. Check them out! 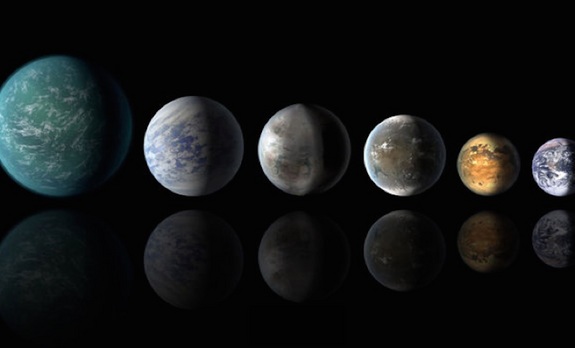 Discovered by the European Southern Observatory’s 3.6 meter telescope in Chile, this planet is located only 22 light-years away and is at least 4.5 times bigger than Earth, but researchers aren’t sure of its rocky-consistency yet. It also completes a cycle around its red dwarf in only 28 days; however, it may be close enough to this “Sun” to be baked by its flares. Better stock up on sunscreen, folks!

This planet is 600 light-years away and was the first Kepler planet found in the habitable zone of its “Sun.” It is about 2.4 times the size of Earth, but researchers are still unsure if it is rocky, liquid or gaseous. In addition, one orbit is about 290 days-long. Don’t make plans for this one anytime soon!

This super-Earth lies about 2,700 light-years away and is 70 percent larger than Earth. Researchers are still unsure of exactly what this planet is made up of, but they do know it completes an orbit every 242 days (similar to Venus and Earth). Kepler-69 c’s host star is only 80 percent as bright as our Sun, but it does appear to be in the habitable zone. Good news? Probably don’t need those expensive sunglasses.

This planet is about 1,200 light-years away, squarely in the habitable zone. It is around 40 percent larger than Earth; however its 267 day-orbit is around a Sun that is much cooler than ours. Grab a sweater and some socks before you leave!

Although only 10 percent larger than Earth, Kepler-186f receives only one-third of its Sun’s energy than we do here on Earth. It lies approximately 500 light-years away; however since its parent star is a red dwarf, it is not considered a “true Earth.” Moving on…

Things are looking up as this recently discovered planet is 1,400 light-years away and the most Earth-like so far.Its parent star is very similar to our Sun and it resides in the habitable zone. In addition, it is.six times the size of Earth and has a “better than even chance” of being rocky! Woohoo, we have a winner!

Even though these discovered alien-planets may be a consideration for another Earth, I wouldn’t pack up just yet. Science and research have a long way to go before we can even begin to ponder the possibilities of leaving our Earth behind. However, if the day should ever come that Earth has become too polluted or too contaminated to sustain us here any longer, then life as we know it will certainly never be the same…