We may think we’ve learned all there is to know about our Moon. However, scientists have now discovered the area called, Mare Imbrium (a.k.a. Imbrium Sculpture) was most likely struck by an extremely large object. It was a big enough impact to leave a visible mark on the Moon’s surface.

To the best estimate of scientists the large mark left on the moon was mostly likely due to the impact of (or pieces of) a protoplanet (this is an extremely large object that is developing into a planet). The scar is estimated be from an impact around 4 billion years-ago. The estimated length of the object to create such a massive mark is thought to have been about 155 miles (250 kilometers) in diameter. This is 30 times more than the team had first estimated!

Professor Peter Schultz from Brown University believes that this large chunk of debris, that created the indention across the entire Southern Highlands, didn’t radiate from the point-of-impact, but rather pointed back to the northwest region of the basin center. 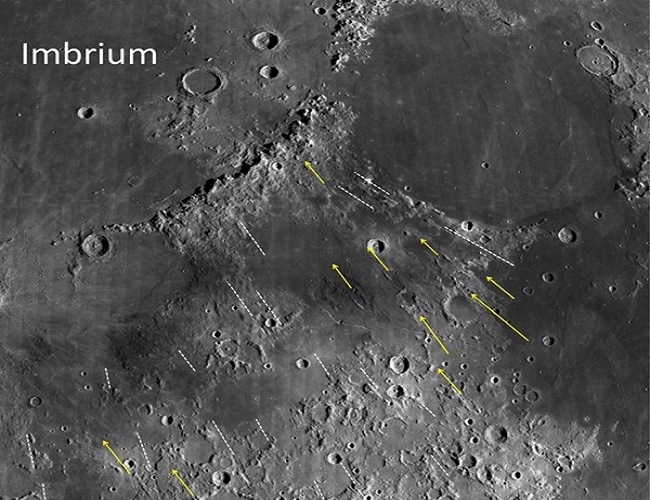 This could only mean one thing. The grooves that surrounded the 776 mile-diameter (1,250 kilometer) crater did not follow the previous theory of impact by a smaller asteroid.

Schultz indicts that if it were a vertical impact, most of the ejected material would have radiated out, like the spokes on a wheel. Even though this theory has been evident for some time, the scar was attributed to the tectonic features of the Moon itself.

How did scientists extrapolate this new information?

The mapping of the Imbrium Structure was done by Schultz and his team using NASA’s Lunar Reconnaissance Orbiter (LRO) and Apollo images at the Northeast Planetary Data Center at Brown University.  Once the LRO was able to indicate a more detailed coordinate system, Schultz was able to take those features and put them over a larger area and onto a larger map.

However, this was still an ify situation. After all, the technology had proven itself worthy on a labratory level, but had not yet been proven on an asteroid level. But David Crawford at Sandria National Laboratories took an advanced 3D modeling system and indeed confirmed that the pattern from this larger asteroid would actually leave behind the grooves found on the Moon today.

Schultz states that after the impact a certain amount of debris would have escaped the collision and continued on its natural trajectory path into space. Those objects would have been on the Earth/Moon crossing orbits and would eventually have been swept away.

With these new findings, scientists are anxious to put this technology to use by mapping and using 3D advanced modeling to predict the sizes of the objects responsible for other impact craters on other worlds. Places like Mars and Mercury will be high on the list for further studies.

Who knows what new discoveries this technique will find? But whatever it is, it is sure to be exciting. Stay tuned…