Behind the fiery wall of solar flares the Sun’s core is rotating very fast. How do we know this? Why does it matter? Read on to learn more about the rotation of the Sun’s Core.

Researchers have discovered a very interesting phenomena about our sun’s core. Using the same process as seismologists, they have discovered that the core of the sun spins four times faster than the other layers. Due to the fact they cannot stick an earthquake monitor on the sun’s surface, the scientists use the “Doppler effect” to make this determination.

The Doppler effect measures waves at the Sun’s surface. In effect, it is the stretching or squashing of waves because of motion, whether it’s motion of the thing emitting the wave or motion of the thing receiving the wave. The ESA/NASA Solar and Heliospheric Observatory team coined the term helioseismology. How does it work? Let’s look at the two types of waves used in studying earthquakes. 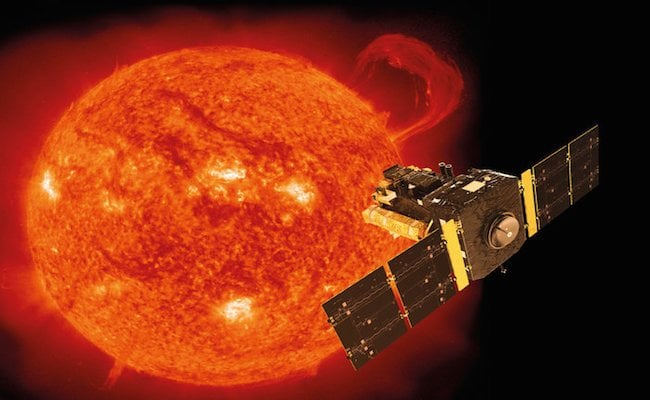 Sudden breaking of rock within the earth or an explosion give off waves of energy referred to as Seismic waves. The energy travels through the Earth and is recorded on a seismograph.

Consequently, they move rock particles up and down and side to side-perpendicular to the direction that the wave is traveling. An Secondary wave can move through solid rock but not through liquid.

Waves at the Sun

The Solar and Heliospheric Observatory (SOHO) team sent a spacecraft to measure the change in wavelength when pressure waves reach the sun. In this case, sound waves wash through the sun and reach the surface, and so the sun’s surface moves towards or away from the spacecraft.  The sun’s surface also gives off light, and the motion means the light waves are squashed or stretched.

The SOHO team spent 16 years monitoring the sound waves passing through the sun. Not only did their analysis conclude that the Sun rotates fast, but they found “G-Waves” or Gravity Waves.

“Buoyant blobs of gas bobbing around deep inside the sun”

The sound waves that pass through the sun subtly changed in pitch by this bobbing around deep inside. The evidence from this data suggests that the core of the sun rotates about once a week, instead of about once a month at the surface.

“G-modes have been detected in other stars, and now thanks to SOHO we have finally found convincing proof of them in our own star,” adds Eric Fossat, lead author of the paper describing the result, published in Astronomy & Astrophysics. “It is really special to see into the core of our own Sun to get a first indirect measurement of its rotation speed. But, even though this decades long search is over, a new window of solar physics now begins.”

With more research scientists may determine the impact of the core rotating faster than the outside. Does this rotation affect solar flares or low periods of sunspot activity? We will have to wait to find out.