We’ve been taught since childhood science class that the ringed planet is Saturn, but new discoveries of Mars and its innermost moon, Phobos is challenging the idea of Saturn being the only haloed planet in the distant future…they may have to change those astronomy books some day. Let’s explore how and why Mars is destined to have a ring (or rings), it truly is an amazing discovery…

Phobos on Collision Course With Mars

According to new studies, Phobos is going to collide with Mars at some point, even if it takes a few tens-of-millions-of-years. This is due to the fact that Phobos is being drawn into Mars by its gravitational pull on the space rock, moving it closer and closer each year; however new research has uncovered some data that suggests, it may be a lot sooner than first predicted.

A statement made by a graduate student, Tushar Mittal, at the University of California, Berkeley and one of the authors of the new research paper says;

“The main factor affecting whether Phobos will crash into Mars or break apart is its strength. If Phobos is too weak to withstand increasing tidal stresses, then we expect it to break apart.”

This crushing blow into the Red Planet will shatter the small moon leaving behind a ring of rocks and debris to swirl around Mars. But the gravitational pull is not the only factor affecting Phobos, it’s apparently showing signs of “stretch marks” that increase its chances of breaking apart. 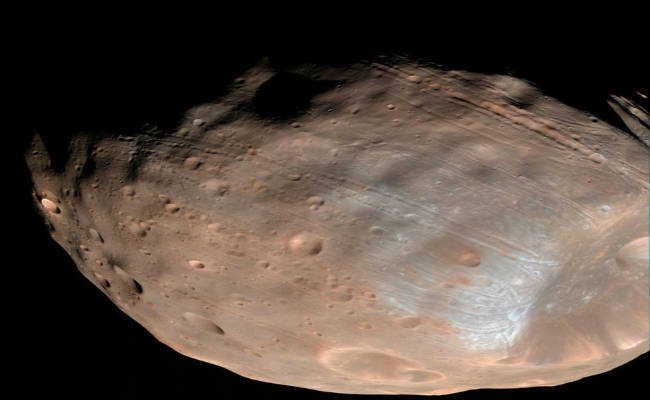 More Than a Few “Stretch Marks” in Phobos

Studies have uncovered some long thin “stretch marks” on the moon, Phobos, which is giving researchers more to ponder. This potato-shaped “rock” has already been doomed to collide with Mars, but now researchers are upping the smash-up date from 30 to 50 million years, to well…a lot sooner. This is due to the fractures that continue to surface on Phobos. A statement made by Terry Hurford, a research assistant at NASA’s Goddard Space Flight Center in Maryland, who led the study, says;

“We think that Phobos has already started to fail, and the first sign of this failure is the production of these grooves.”

One theory suggested that an object hit Phobos and nearly tore it to pieces; however it doesn’t appear like these grooves were created by an impact, but rather radiate from another area. One theory states that debris flying off of Mars may be impacting Phobos to create these visible grooves in its surface. But the tremendous pulling back-and-forth between Mars and its moon could also produce these stress fractures — this theory was proposed when Viking spacecraft first transmitted the images of Phobos — but at this time researchers thought Phobos was a solid mass, which would make stress marks less likely to occur.

Today, scientists believe this moon may actually be held together by loosely piled rubble and about 330 feet (100 meters) of regolith (dust). In addition, some of these marks are younger than others which implies it is happening on an ongoing basis. If these premises prove to be real, it certainly could be the effects of gravitational pull or impacts on the small moon.

Phobos is estimated to be only about 14 miles in diameter (22 kilometers) and orbits Mars, rising and setting twice-a-day. Dramatically affected by the tidal stresses from Mars — Earth feels the gravitational pull of the moon which causes the tides to rise and fall, even though the moon has no oceans, Earth’s gravitational pull is still called tidal forces — Phobo like our moon also experiences these tidal stresses.

A study done by Mittal and co-author Benjamin Black (a postdoctoral researcher at UC Berkeley) suggests that instead of shattering, Phobos will most likely be pulled apart by the gravity on Mars. These researchers studied the “strength” of Phobos (including its composition and density) to see just how much stress it could withstand by comparing several meteorites on Earth. What did they conclude? Phobos is most likely made up of porous and heavily damaged rock. Mittal said in a statement;

“The moon is probably neither a complete rubble pile, nor completely rigid. The porosity of Phobos may have helped it survive.”

After running comparison stresses here on Earth, the two determined that Phobos will most likely break apart to form a debris ring around Mars over the course of 20 to 40 million years.

Because of Phobos make up of mostly dark material, this debris will not reflect light all that well, so the ring may be difficult to spot using an amatuer telescope, but it has been suggested that the ring’s shadow could very well be visible.

However, if you were standing on the surface of Mars (which very well may be a possibility in the future) the ring will take on different views depending on where you are standing. Mittal says;

Although, Phobos is still a long way off from colliding with Mars, the thought of having another ringed planet is awe inspiring…