If you are of a certain age, you probably remember Pluto as being the ninth, the smallest and the outermost planet in our solar system. It was always there on the charts and textbooks, a tiny white marble just beckoning us to discover what she’s all about. However, back then we didn’t have the technology to discover the wonders of this mystery planet called Pluto, but now we do and what the world has learned is about to put this dwarf planet back on the charts and back into our hearts.

The Pluto of Yesteryear

Before NASA’s New Horizons expedition we knew very few things about Pluto. We knew it was approximately 4.67 billion miles away (7.5 billion kilometers). We knew because of its distance from the Sun that it was very cold – scientists revealed this chilly rock could range from -391 degrees Fahrenheit to -356 degrees Fahrenheit (-235 to -210 degrees Celsius). We also knew it primarily consisted of rock with a thick icy layer and that its atmosphere was mostly nitrogen with some methane and carbon monoxide… certainly not human-friendly.

Interestingly enough, Pluto was first spotted by a 24 year-old research assistant at the Lowell Observatory in Flagstaff, Arizona. The year was 1930 and Clyde Tombaugh made history when he eyed this little ball of ice; however, some credit has to be given to astronomer Percival Lowell, who fifteen years earlier predicted the presence and even charted this far away planet based on the irregularity of Neptune’s orbit.

Did you know an eleven year-old girl was the one that gave Pluto its name? Venetian Burney suggested “Pluto” after the Roman god of the underworld because like the deity, Pluto also sat in the farthest reaches of the world. Her grandfather was impressed with her wisdom and told an astronomer friend of his at Oxford University. Pluto’s first two letters also represent its original finder’s name (Percival Lowell). The rest, as they say, is history…

As time marched on and science became more advanced, Pluto took a hit in 2006 and was demoted from a planet to a dwarf planet.Not only that, it was dropped from the books and is no longer considered the ninth planet in our solar system. Why? Because scientists believed that Pluto is simply not exciting enough to be regarded as part of our solar system, as it is in fact, only the brightest member of the Kuiper Belt. For this reason Pluto may have been eventually forgotten if it wasn’t for the curiosity of man to explore beyond the realm of “possibility.” 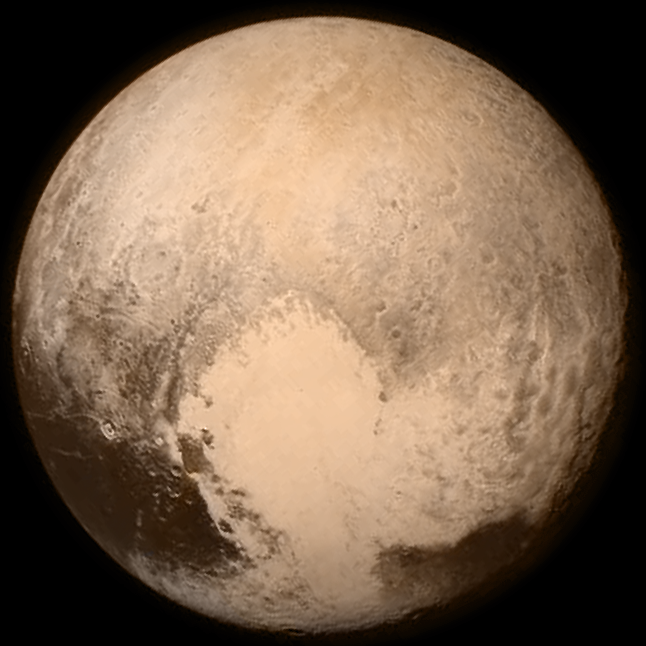 NASA’s New Horizons is a 1,000 pound space probe (453.5 kilograms) about the size of a grand piano. It was launched into space to embark on a 3 billion mile journey to Pluto (and beyond) that would take about nine years to fulfill and $700 million dollars to fund…that’s a long wait and a lot of cash for a “simple” dwarf planet. Could there be more to Pluto than we once knew?

On Monday July 13th, 2015 New Horizons made history when it zoomed 6,000 feet (1,828 meters) past our icy dwarf at a whopping speed of 31,000 miles-per-hour (49,889 kilometers) all the while snapping the first ever “up-close” pictures of Pluto. What this probe recorded is remarkable.

NASA released the first photos of Pluto on July 14th showing some fascinating details of this dwarf planet’s surface including a 1,000 mile (1,609 kilometer) heart-shaped area. Although, there’s not much going on inside the heart, perhaps it is just Pluto’s way of saying, “thanks for taking a look around.”

New Horizons also lets us in on a new measurement for this icy rock. Pluto is 1,473 miles (2,370 kilometers) in diameter, which is about 18.5 percent the size of Earth. In addition, the probes vacation to the outer reaches of our solar system has also revealed another interesting tidbit that has scientists very excited.

As Jeff Moore at NASA told TIME, “Pluto may be the star witness to the whole third zone of the solar system.”

Before the Kuiper Belt was discovered we were led to believe that our solar system had only two zones. The inner zone contain the “rocky” planets (from Mercury to Mars) while the outer zone is home to the gas giants (from Jupiter to Neptune). When Pluto came into view astronomers realized there was indeed a third zone, one Moore describes as “a vast realm of ice worlds.”

What’s next for New Horizons? This multi-billion dollar probe will continue on into the Kuiper Belt to hopefully send back some more tell-tale photos of what lies beyond our telescopes. As for Pluto, it may never regain its once famous planet status in our solar system, but its photos are sure to be talked about and admired for years to come.