Our world is an astonishingly active planet. First, the amount of water leads to erosion. Second, the crust, divided into plates, move about. In fact, where plates spread apart, lava wells up to form a new crust. However, when plates push against each other, they crumple the crust to form mountains. Furthermore, when one plate slides over another, you will see volcanism. The entire process summed up, in theory, became known as plate tectonics in the 1970s.

The magnetic field makes compasses point north and it can have the same effect on magnetic crystals. When magma cools, magnetic minerals in the lava solidify with their crystals oriented north, along with the magnetic field. Scientists studying the sea floor found stretches of magnetic material that were oriented south instead of north. The seafloor orientation wasn’t random but found in alternating bands of north- and south-pointing crystals on either side of oceanic ridges. Geologists figured out that the differing orientations made sense if the continents weren’t frozen in place. The reason some crystals didn’t orient to Earth’s current magnetic field was that the continents containing the rocks had shifted position.

Did Meteors Cause Plate Tectonics?

Researchers at Macquarie University in Australia believe they know the origins of the tectonic plate shifts on Earth. With a study involving meteorite bombardment simulations, they theorize that the meteors may have started the process.

“Our results indicate that giant meteorite impacts in the past could have triggered events where the solid outer section of the Earth sinks into the deeper mantle at ocean trenches – a process known as subduction. This would have effectively recycled large portions of the Earth’s surface, drastically changing the geography of the planet,” explained lead author Associate Professor Craig O’Neill from Macquarie University. 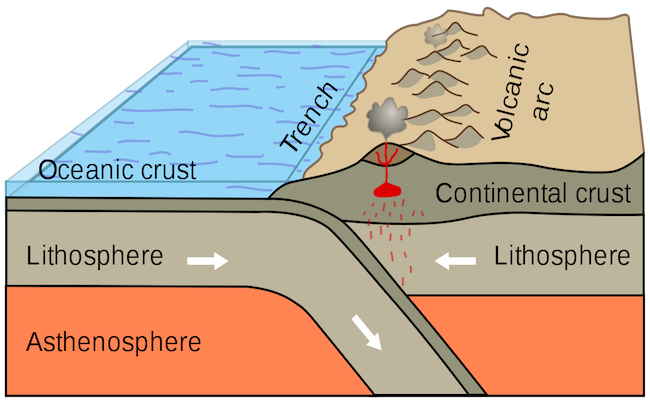 Were the Plates Already Moving?

In the Hadean period, scientists believe that the Earth survived frequent large-scale asteroid-meteorite bombardments, which resulted in almost a complete destruction of the primary terrestrial crust. Prior to that period, they believe that the crust remained a stagnant lid. As a result of a meteor impact, the crust sank into the mantle. At this point, geochemical and geodynamic data suggests that the crust sat motionless on the surface.

“We know that meteorite impacts had a huge effect on the inner solar system at this time,” says Associate Professor O’Neill, “you only need to look at the Moon to see that. What isn’t clear was how our own impact history might have affected the planet’s evolution.”

“We’ve seen evidence of some geological activity that suggests something like subduction acted on the early Earth – but this is hard to reconcile with other geodynamic simulations. But if we consider Earth as part of an evolving early solar system, as opposed to only looking at the planet in isolation, then this evolution starts to make more sense,” he added.

The theory that meteors set the plates into motion places an working theory at the forefront of plate tectonic formation. With more evidence and simulations, scientists may eventually know for sure. With our planet in constant motion, new theories will abound and more exciting ideas will present themselves. What a truly exciting planet.