A NASA innovative Advanced Concepts proposal is seeking approval for a mission to Jupiter’s moon, Europa, to map ice thickness and to potentially find signs of life below the icy surface. And, they are set to do it all for “cheap” with a new technology called “CubeSats” and their smaller micro-probe-minions called “ChipSats.”

The Europa CubeSat mission proposal is a collaboration between Draper Laboratories and Cornell University. It would utilize a combination of small satellites known as CubeSats and even smaller microprobes called ChipSats to explore Europa with an estimated price that comes in considerable lower than most deep space missions. 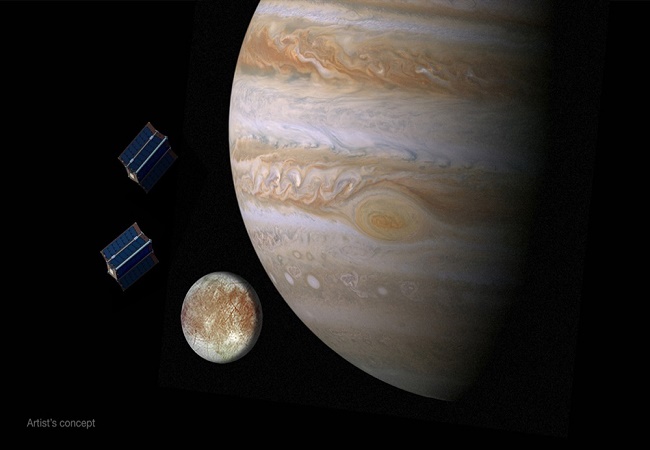 This is a high-tech probe that consists of 3 to 12 individual CubeSat units stacked together. This combo-CubeSat would then orbit the icy moon of Jupiter. Each CubeSat contains a simple instrument payload which consists of communications equipment and a Cold Atom Sensor (this contains two chambers of low-temperature atoms). The idea behind this invention is to measure the tug between each chamber, which can create an effective map of the icy terrain of Europa by measuring ice thickness and find areas of low ice density to potentially access the ocean below.

The plan is to fly the probe just eight miles over the surface of the world, gathering information. And because of the simple instrument payload, it would be well protected from radiation. After the CubeSat has mapped out the surface of Jupiter’s moon, it would then drop thousands of tiny ChipSats onto the surface. This is where it gets really exciting. According to Brett Streetman, a senior member of Draper’s technical staff,

“The hope here is that we actually want to get data from the surface of Europa, and we want to get it from somewhere where it’s interesting.”

However, the team anticipates that not all the ChipSats will survive the long plunge onto Europa’s surface or the harsh radiation present there (that’s why they have loaded up the number). But the lucky ones that do survive would be able to search for amino acids on the surface and determine its chirality, or “handed” ness. In a nut shell, if they all seem to go in one direction or the other, it could be a sign of biological processes on Europa.

“In the end, with these ChipSats, we have to boil something down to a yes or no answer, so we need to say ‘yes there’s a strong handedness to the amino acids here,’” Streetman said.

As exciting as this all sounds, the mission is still in its infancy stage with about 10 to 15 years of work to be done before it can actually be launched. But researchers are anxious to get this new technology up and running as they also want to send the CubeSat-probe into Saturn’s rings to study its composition or even to measure seismic activity on asteroids. Draper has also looked at using it to create weather monitors for Titan or Mars.

“We looked at applications around the solar system, and there’s a lot of cool things you can do with the CubeSat platform that you wouldn’t want to do with a traditional spacecraft,” Streetman said.

With the help of the CubeSat probe we may one day learn all there is to know about Europa and other celestial wonders. Let’s hope the scientific team can get the green light and the technology perfected.