NASA plans to build the Gateway space ship starting in 2022. Astronauts will need habitat areas when they live on board. Read on to learn more about these habitation units.

When NASA launches its new spaceship Gateway in 2022, it will take 4 years to complete. One of the key components to Gateway will be its living quarters for astronauts. NASA has asked five companies to come up with design ideas for the habitation units. They are not necessarily competing with each other. Instead, they are making these units as a way for NASA to problem solve potential risks.  They want to study each unit and pull together the best from each one. At the same time, they will analyze those areas that will not work for deep space living.

Each habitat must support day to day living for astronauts. For example, they must have an area for sleeping and showering. They must have a place to exercise and eat. Once the designs are complete, NASA will put them through a series of tests.

“During the tests, future Gateway flight operators at NASA’s Johnson Space Center in Houston will collect actual live telemetry streams from each prototype. Flight operators will monitor habitat performance and support practical mission activities as astronauts conduct “day-in-the-life” procedures within each habitat prototype, providing their perspectives as potential crew members who may one day live and work aboard the Gateway.” 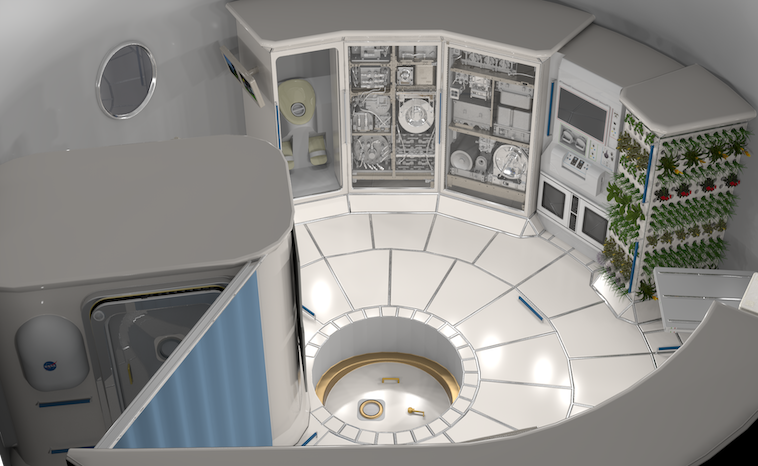 1. Lockheed Martin: Lockheed Martin plans to use a design that was at one time going to the International Space Station. It combines Lockheed’s robotic planetary spacecraft and the Orion capsule. The Orion capsule will provide transportation for the astronauts to and from Gateway. As a result, the Lockheed design will allow the area to be changed around to support different missions.

3. Boeing: Boeing is making the Boeing Exploration Habitat Demonstrator. It has been making parts for NASA since 1993. They have also made parts for the International Space Station. However, Boeing will focus on cabin atmosphere. With different payloads, the volume of atmosphere inside will be impacted. Consquently, Boeing is working on making a habitat with that in mind.

4. Sierra Nevada: The Sierra Nevada’s Large Inflatable Fabric Environment (LIFE) living area is inflatable. It is designed to launch in a compact, “deflated” configuration, then inflate once it’s in space. This compact size allows it to fit in a limited payload area. It will not need a large rocket to get it into space like a hard shell structure. The design will inflate to 27 feet in diameter and accommodate three floors of living areas.

5. Bigelow Aerospace: The Bigelow’s B330 living area is also an inflatable module. It will expand to 330 cubic meters which is the same 12,000 cubic feet. In addition, the outside of the habit will be 55 feet long and 22 feet in diameter. Furthermore, the outside also will provide radiation protection like the International Space Station. It can hold six astronauts and provide living arrangements for them to live comfortably.

“This prototyping approach allows us to design, build, test and refine the habitat long before the final flight version is developed,” said NASA astronaut Mike Gernhardt, principal investigator of the agency’s habitation prototype test series. “We are using this operational-driven engineering approach to gain an early understanding of exactly what we need to address the mission, thereby reducing risk and cost.”

What will the new habitat quarters for the astronauts look like? Unfortunately, we will have to wait a few years to find out.