In case you missed the picture earlier this year, DSCOVR has snapped another amazing photo of the moon passing in front of the Earth. This only happens twice a year where the moon and Earth are in perfect sync, and DSCOVR snapped them both.

With its Earth Polychromatic Imaging Camera (EPIC) onboard NASA’s and NOAA’s Deep Space Climate Observatory, the satellite was once again able to image the moon traversing across the face of the Earth. This was made possible by its four-megapixel charge coupled device (CCD) camera and telescope, which orbits at a whopping one million miles (1,609,344 kilometers) from Earth.

The stunning shot that is making its way around social media was recorded on July 5th, 2016 and shows the moon is perfect harmony with our beloved planet as it moves over the Pacific Ocean showing Australia, then into the Indian Ocean. From here it traveled past Asia with the North Pole at the top of the images. 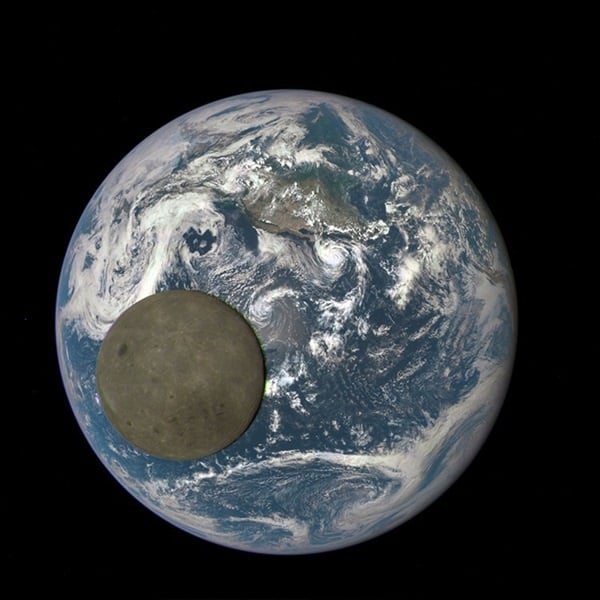 Scientifically speaking, the satellite is orbiting around the Sun-Earth system at the first Lagrange point. This is where the gravitational pull from the Sun is equal, but opposite to that of the Earth. The orbit then changes from an elliptical to a circular, then back again. This is referred to as a Lissajous orbit.

Even though DSCOVR does intersect with the Moon’s orbit about four times-a-year, it only appears between the Earth and the satellite twice.

With over one-year in space, the images of our moon in front of Earth is just a bonus to this satellite’s real mission – which is to study the real-time solar wind for the National Oceanic and Atmospheric Administration (NOAA). It does this by being strategically placed between the Earth and Sun. EPIC’s job upon the satellite is to be in constant view of the Earth so it can monitor the ozone, cloud height, aerosols, and vegetation in the atmosphere.

Watch the video of the moon traversing past Earth!

We live in an exciting time. Technology has not only taken us to the moon and beyond, but we are now able to take a long look into what lies in space. The discoveries yet to be made can only be outstanding. In the meantime, take advantage of your own night sky to view what is going on right above your head. Who knows? You may just discover something mind blowing…

Want to read more about moons? Check out this article: Landing on Europa the “Nightmare” Moon.” It’s sure to have you thinking.