NASA has funded a new project utilizing robots to help build infrastructure on the moon’s surface. Read on to learn more about robots working on the moon.

When astronauts reach the moon in 2024, they hope to have some help building infrastructure in the way of assembler robots. NASA Assembler robots would assist astronauts by building solar arrays and other buildings as needed. Solar arrays are units of solar panels placed together on a rack. This project is one of many involving robots that could accompany humans to the moon during the Artemis program, which is scheduled to land humans on the moon in 2024.

How does an assembler robot work? NASA says that this type of robot would look at the needs of the situation. Then, after determining the situation would start to construct the needed item. Engineers have software in development that would allow this type of analytics to work on the lunar surface.

Furthermore, the software would allow robots could choose how many platforms to stack. In addition, they could also choose the right tool for the task at hand. It would also calculate trajectories and identify and correct any errors during the build process.

“The project goal is to increase the technology readiness level for the modular robot, autonomous in-space assembly, and develop a robotic prototype for ground testing,” principal investigator James Neilan, a computer engineer at the NASA Langley Research Center.

How Do They Build?

Moving around like inchworms, they clamp onto the voxels by opening and closing their V-shaped bodies. Their robotic arms pull them across the structure as they build it. As a result, the tiny robots can each count their steps on the structure they’re building. The robots move in relation to the pieces it’s building, which is called voxels. As voxels are added, the tiny robots adjust their positioning relative to the structures. When it comes to space stations and lunar habitats, the robots would essentially live on the structure, completing continuous repairs.

“For a space station or a lunar habitat, these robots would live on the structure, continuously maintaining and repairing it,” says Benjamin Jenett, a student from MIT. 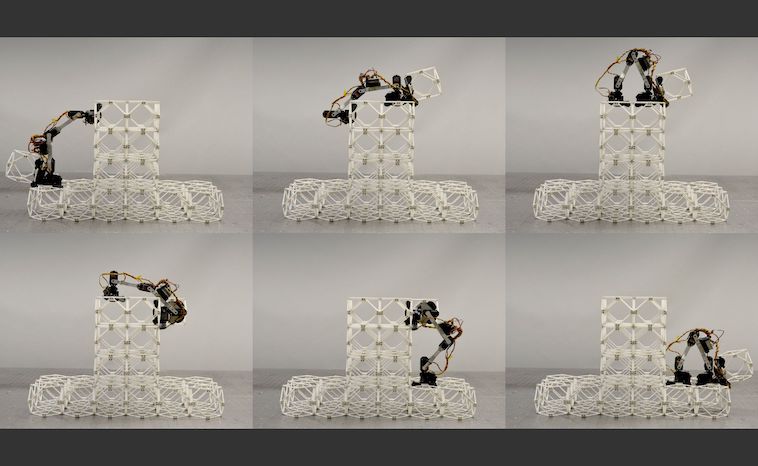 We know that whenever NASA develops new technology, the public sector seems to benefit. For example, we have LED’s, scratch-resistant lenses, and foil blankets because of NASA. When engineers create task management and error software, the agricultural community will benefit. For example, picking produce robotically is delicate work that could be refined through advances in machine learning. While the NASA assembler robots build, a bit of redesign would allow them to pluck or pick berries and fruits.

For now, we look forward to watching them develop for use on the lunar surface. Their capabilities seem endless as helpers for building space structures. As they build, NASA could send more material, allowing them to continue building. This frees up valuable astronaut time exploring the lunar surface and conducting tests. NASA has awarded several million dollars to two groups working on the assembler robots. The further development of these companies will have a great impact on the Artemis program.

We look forward to watching how the lunar surface will change going forward in the next decade.