Researchers from Baylor University have discovered a large chunk of metal on the moon. Read on to find out more about this new discovery.

On the dark side of the moon lies the South Pole-Aitken basin. The basin is an impact crater 2500 km (1600 miles) in diameter and 13km (8 miles) deep. Scientists have studied the basin since the 1960s. As a matter of fact, during the 1990s, the spacecraft Galileo and Clementine visited the moon. Their visit revealed the presence of titanium and iron oxide. The presence of these compounds gave the basin a darker appearance than the surrounding area.

Mysterious Metal on the Moon

In May of 2019, researchers from Baylor University announced the discovery of a large mass of mysterious metal residing in the basin. How did they reach this conclusion? Experts combined readings from Nasa’s Gravity Recovery and Interior Laboratory (GRAIL) and Lunar Reconnaissance Orbiter missions. In 2011, NASA sent two spacecraft to the moon to map the lunar surface and measure the gravitational tug. By measuring the change in distance between the two spacecraft, the gravity field and geological structure of the Moon was obtained. In addition, NASA wanted to determine the subsurface structure of the impact basin. The GRAIL mission lasted just over one year.

The Lunar Reconnaissance Orbiter (LRO) was sent in the moon in 2009 along with the Lunar Crater Observation and Sensing Satellite (LCROSS). The LRO carries six mission instruments on board.

Using both the LRO and the GRAIL researchers saw a discrepancy. They saw a mismatch between the surface topography and the gravitational tug of the moon. When looking at the data from the LRO and GRAIL their readings showed a gravitational pull that rose above the South Pole-Aiken Basin. This pulls suggests that something extremely dense lies beneath. “When we combined that with lunar topography data from the LRO, we discovered the unexpectedly large amount of mass. The mass lies hundreds of miles underneath the South-Pole Aitken basin,” Dr. James said.

“Imagine taking a pile of metal five times larger than the Big Island of Hawaii and burying it underground,” study lead author Peter B. James, a geoscientist at Baylor University in Texas, said in a statement. “That’s roughly how much-unexpected mass we detected.” 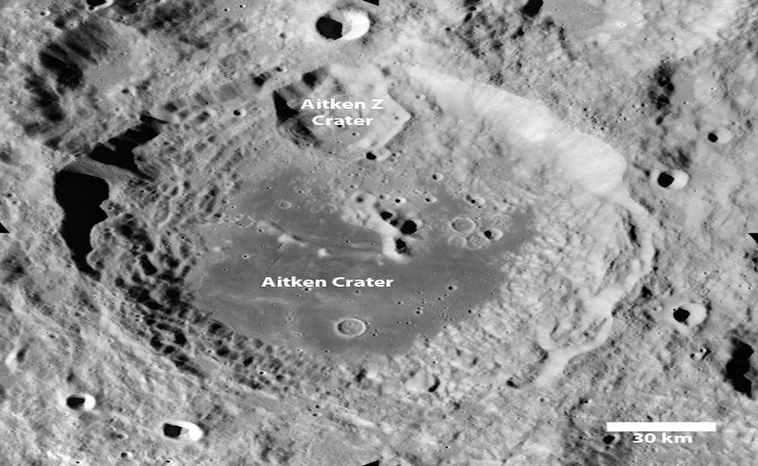 Where did this mysterious metal come from?  Researchers believe that an asteroid hit the moon about 4 billion years ago. ”One of the explanations of this extra mass is that the metal from the asteroid that formed this crater is still embedded in the Moon’s mantle. The huge mass, “whatever it is, wherever it came from” weighs down the basin floor by more than half a mile,” Dr. James added. Simulations suggest the space rock had a hot core of molten iron and nickel that was injected into the moon during impact.

Another possible explanation for the anomaly, the researchers wrote, is that the area is rich in oxides. This likely would have formed as the moon’s ancient magma ocean cooled and solidified. However, if that were the case, then the moon’s gravity would have pulled it into the center long ago.

When NASA sends astronauts to the moon in 2024, the mission should include getting samples from the basin. If it is indeed metal, this may prove a valuable resource for lunar habitation.