Can bacteria exist in space? What does zero gravity do to bacteria? Scientists have made some interesting discoveries. Read on to learn more about bacteria in zero gravity.

Researchers from the University of Houston reached an interesting conclusion after completing experiments with E Coli bacteria. They wanted to see what would happen to bacteria strains of E. Coli when placed in a regular gravity environment and a non-gravity environment.

Escherichia coli (E. coli) bacteria normally live in the intestines of healthy people and animals. A few strains the E.Coli bacteria can cause health issues. With that in mind, scientists want to know if E. Coli, or any other potentially harmful bacteria landed on the International Space Station, what would happen. The first E.Coli bacteria strain, NCM520, grown in a flask under normal Earth-gravity conditions, remained stable. The other strain, MG1655, was placed in a special chamber that simulates microgravity. While in the chamber, a High Aspect Ratio Vessel rotated the bacteria 25 rotations per minute on its side. Therefore the E. Coli growing in the liquid media remained in a constant free fall.

Results from the Test

The MG1655 strain had outgrown the gravity-controlled strain, NCM520, by a factor of three to one. The researchers inferred that the stress of being in a microgravity environment started an adaptation that increased the competitiveness of the MG1655 strain. Furthermore, the research team wanted to know whether this adaptation occurred at the genetic level, or if a physiological response resulted from the change in gravity. Another conclusion they reached meant  that some of the changes were physiological. When returned to Earth’s gravity several changes took place at the genetic level. Consequently, the  MG1655 strain adapted with an advantage over the NCM520 strain. Hence, 16 genes had mutated in MG1655, including five genes linked to the formation of biofilm—the surA, fimH, trkH, fhuA and ygfK genes.

An enhanced rate of biofilm formation helps bacterial survival and this adaptation to microgravity would seemingly improve it’s ability to colonize surfaces in space environments. 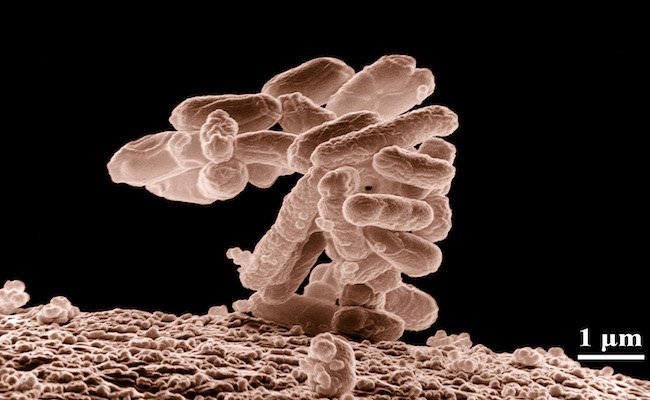 The Risk of Mutation

Researchers concluded that a correlation exists between the growth of biofilms and the virulence of the bacteria. Especially relevant was the link between the genes responsible for biofilm formation and strains of bacteria that become pathogenic. Pathogenic strains cause disease. Previous experiments led by the geneticist James Wilson of Villanova University showed that a pathogenic strain of salmonella grew more virulent after exposure to microgravity. Biofilms can contaminate water recycling systems. An increase in virulence could pose a health risk to astronauts. Further experiments could take place in HARVs on Earth, but the best way to confirm the results means testing in orbit.  An orbit test can then confirm whether the bacteria behaves in a similar fashion.

As researchers learn more about gravity and zero gravity on bacterial strains, they increase the ability to protect the astronauts at the International Space Station. If zero gravity increases the virulence of any particular strain that could pose a danger to them. Identifying all the potential hazards will help keep everyone safe in space.