We know all there is to know about the Apollo 11 moon landing. But do we really? A new movie debuting in january of 2017, is based on one woman, Katherine Johnson, whose mathematical mind played a huge role in the success of this mission. And she did it all in a time when African-American women and men were still fighting for their rights.

Johnson was born in West Virginia in 1918. As a youth, Johnson always had an aptitude for mathematics and by the age of 10 she was a freshman in highschool. This is not only a truly amazing accomplishment for any youngster, but at a time when the Africa-American education system stopped at eight grade, Johnson was making strides. At age 15 she went on to attend college, taking every course she could in math. Once professor, W.W. Schiefflin Claytor (the third African American to receive a PhD in math) even added math courses to accommodate Johnson’s genius level. By the age of eighteen, this young woman graduated college with degrees in both math and French. 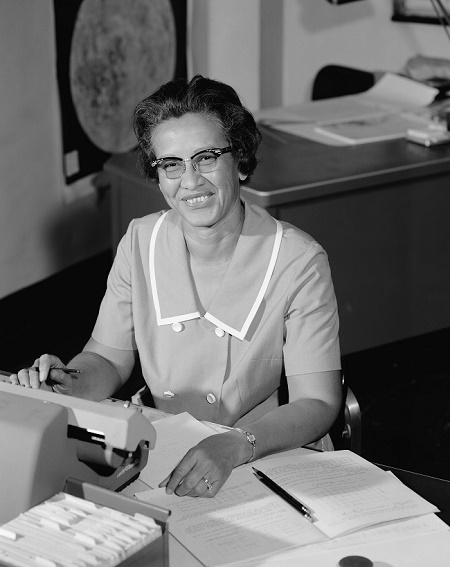 Katherine Johnson at NASA in 1966.

After years of being a teacher, in 1953 she began working for NASA’s predecessor, the National Advisory Committee for Aeronautics, or NACA.  At a time when woman were not working outside the home, the NACA was hiring talented ladies for the tedious and precise work of measuring and calculating the results of wind tunnel tests in 1935.

Since at this time there were no electronic computers like we have today, these woman were called “human computers.”

During World War II, the NACA then expanded this effort to include African-American women. They were so thrilled with the results these woman were getting, they kept them on after the war was over. By 1953 there was a growing demand for research in the space-arena, which meant openings for African-American computers at Langley Research Center’s Guidance and Navigation Department.

Unlike some of the human computers, Johnson’s talent was remarkable and undeniably useful. She calculated the trajectory for Alan Shepard (first American in space). John Glenn requested the assistance of Johnson (even after NASA began using electronic computers) to personally recheck the calculations made by the computers before his flight aboard Friendship 7 (mission on which he became the first American to orbit the Earth).

Johnson continued her work at NASA combining her talents for numbers with the electronic computers. Without her contributions, the mission of the Apollo Moon landing may not have gone as well as it did. In addition, the start of the Space Shuttle program was also aided by the smarts of this one brave woman.

Thank goodness for the people whom looked past the segregation of the color of one’s skin to see what truly lies inside…a brave, dedicated and intelligent woman. Johnson may have been in the “background” of the space missions, but her talents will not be denied today.

Check out the trailer of the coming movie, Hidden Figures, set to debut on January 13, 2017, which depicts the accomplishments of Johnson and her amazing work with the Apollo 11 moon landing.