You may have read a headline or two about Mars appearing in the night sky as full and round as the moon. In fact, the story has been making its way around the internet for the last 12 years, usually about this time of year (end of August). Unfortunately for those of you anxiously awaiting this unbelievable phenomenon I’m sad to say it’s all a hoax, folk

Why It Can Never Happen

Although it would be a spectacular sight to behold, Mars can never appear as a “full moon” especially in 2015 when the martian planet is not even at its brightest or closest arc to Earth. And even if Mars did appear side-by-side to the moon, it is still just a pinpoint of red light about 1/140th the size of our full moon. In other words you would have to take 140 Mars all lined up together to equal the diameter of the moon.

So how did this hoax get started? It all began back in 2003 on August 27th when Mars actually did align with our moon and was separated by only three light-minutes or 35 million miles – the closest it has been in 60,000 years! However, it never appeared as a “double” moon, only a flaming point of light. 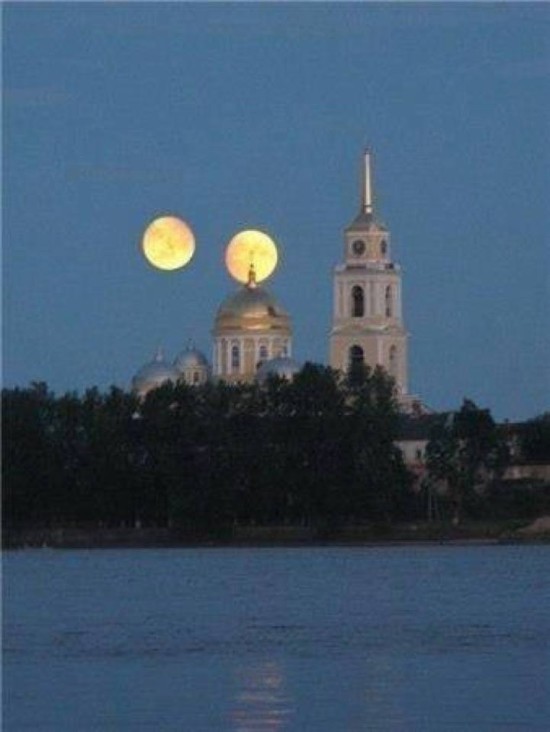 Picture that sometimes circulates on Social Media; courtesy of FaceBook

Even though we will never view Mars as a looming beacon in our night sky, it is still a planet worth exploring.

The dusty red “rock” is the fourth planet from the Sun and is known for its reddish soil and thin, cold, red atmosphere. Mars is half the size of Earth, but has the same amount of desert region because of its inability to contain liquid water on its surface.

Thanks to the landing of NASA space probes on this mysterious planet, man has gotten a closer look at its terrain which revealed some remarkable finds. Mars can claim to have the highest mountain in our solar system. Olympus Mons is about 17 miles (27 kilometers) high, putting it about three times that of Mount Everest. The Valles Marineris system discovered in 1971 run as as deep as 6 miles (10 kilometers) and east-to-west at another 2,500 miles (4,000 kilometers) – about the width of Australia! In addition, Mars also has the largest volcano which measures in at an astounding 370 mile diameter (600 kilometers) and is similar to those on the islands of Hawaii.

The debate and the hunt for life on Mars has been going on for decades, but scientists feel they may be closing in on some hard facts. Curiosity rover has found evidence for a lake on Mars that may have once supported life. Scientists also speculate there may also be water present underground, which could also hold the answers to whether life was or is able to exist on this red rock.

And what about all the fuss about the “Face on Mars” snapped by Viking 1, the so-called “thigh bone” lying in the dust or the shining alien light captured in the distance? Could these all be subtle signs that there is indeed life on this desolate planet, hidden beyond or beneath our probing technology? Or is it just coincidence or another myth being spun for the enjoyment of those who want to believe it? Time will only tell.

Until then keep your eyes on the night sky and minds open to the mysteries that lie beyond our small planet. Even if Mars never appears has a “double” moon, there’s always something spectacular just waiting to be discovered.