NASA has made public a daring mission to the “nightmare” moon of Jupiter, Europa. Aiming for sometime in the 2020s, the 230 kilogram (507 pound) lander will soar above the icy moon several times before dropping onto the rugged terrain of Europa.

Who’s going to make this happen? The same engineers who masterminded the daring Curiosity landing on Mars in 2012. These esteemed folks are currently working on the best way to drop the lander on Europa and in fact, in early November of last year, they presented their preliminary findings to the one person in the world who can take this “dream” and make it a reality; John Culberson a House Appropriations Subcommittee Representative that oversees NASA’s budget. In a statement made by Culberson after meeting with NASA’s scientists, he says;

“I told them to do whatever it takes. All of humanity is going to want to know what’s under the ice.”

Culberson is completely behind this mission and is doing everything possible to make it happen. 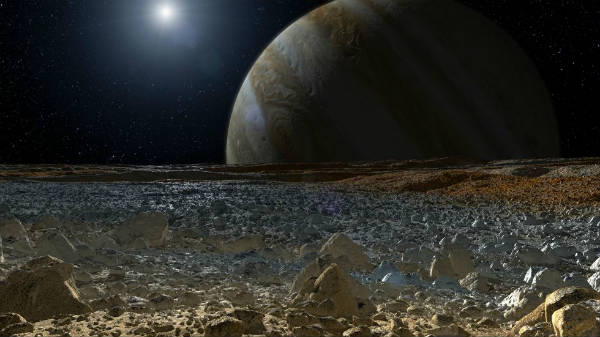 An artist’s concept shows what the surface of Jupiter’s moon Europa may look like.
NASA/JPL-Caltech

The last time NASA visited Jupiter was in the 1990s and the early 2000s which was done by the Galileo spacecraft. Even though Galileo was able to snap images of Europa during its 11 flybys at a distance of 200 kilometers (124 miles) those pictures ended up being very disappointing and limited–the best of them had only a resolution of about 10 meters per pixel. In addition, these images were also stored on a tape recorder with a capacity of 114 megabytes, and a (not known at the time) flawed rewind mode which hampered even that modest device.

What Is Expected on Europa?

Scientists have done enough research to know this mission, albeit an important one, is not going to be easy. For starters, Jupiter rains down enough radiation on Europa to kill a human in a matter of days. The moon also is affected by its planet’s powerful tidal forces which literally creaks the deep frozen crevices of Europa, while its ice is being pushed upward and pulled downward by tens of meters every few days! As if this isn’t enough to contend with, it’s really cold on this moon–210 degrees Celsius.

Even though this is a very forbidding surface, scientists know that just a few kilometers below lies the largest ocean in the known Universe. It in fact dwarfs any on Earth and encircles the entire moon, plunging as far as 100 kilometers (62 miles) deep. Interestingly enough, the same tidal forces that rip along Europa’s icy surface also tug on the core of this ocean, which dissipates heat, providing more than enough energy to warm this massive body of water.  Many astrobiologists say;

Because of all the possibilities that Europa holds scientists are anxious to begin exploration of this icy moon, despite all the “nightmarish” extremes that lie ahead. Time will only tell what secrets Europa holds, as we wait anxiously for that day of arrival on one of the most fascinating wonders of our Solar System.