Astronomers have discovered a massive planet 650 light years away, but it is scorching hot and super massive. Why is it so hot? What makes it 2.5 times larger than Jupiter? Read on to learn more about this massive scorching hot planet.

Astronomers from Ohio State University just announced the discovery of KELT 9B, a giant gas planet 2.8 times more massive than Jupiter. Located 650 light years away from Earth, in the constellation Cygnus, it orbits perpendicular to its host’s axis of rotation. KELT-9b flies over its parent star’s north and south poles with every 1.5-day orbit it completes. A trail of gas follows behind it like a comet. Due to the extreme radiation from its host star, the planet has inflated its visual size, but records a smaller radius than Jupiter.

How Did They Find It?

The KELT 9B planet was found using one of the two telescopes called KELT, or Kilodegree Extremely Little Telescope. KELT focuses on bright stars because it uses small telescopes. With a star so massive any dip in its brightness would indicate a large planet passing by it. In the spring of 2016, scientists recorded a 1/2 percent dip in the brightness every 1.5 days. 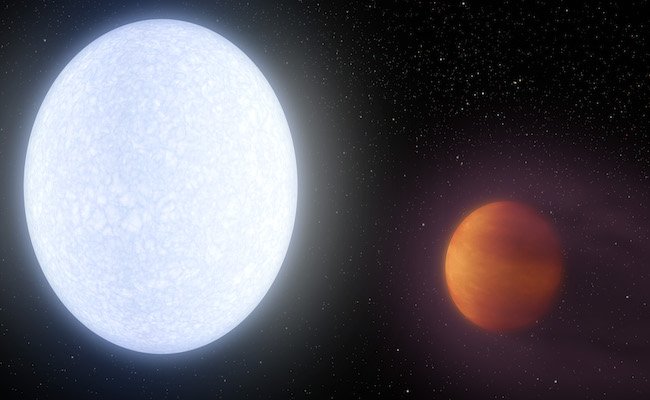 KELT-9, a hot blue star, sends out huge amounts of ultraviolet light and heat. This intense heat causes the gases on the planet to puff, making it appear more massive than Jupiter. Due to the fact it has only been around for 300 million years, it is a relatively young star, and therefore, twice as large as our sun, and nearly twice as hot.

Why Is It So Hot?

KELT-9b attributes its 7,800 degree Fahrenheit (4,300 Celsius) temperature due to its close proximity to KELT-9. The planet always faces its parent star; tidally locked, and therefore the surface temperature remains the same due to the constant heat. Scientists believe that its poor atmosphere may prevent the heat from spreading to the night side of the planet, and therefore it remains colder.

When We May Stop Seeing It

Due to the fact that it orbits perpendicular to the star’s axis, scientists believe that it may change it’s orbit within 150 years. Once this occurs they speculate that they may not see the planet’s transit for several thousand years. The other reason scientists may lose sight of KELT 9B may come from the fact that the planet appears to be evaporating. KELT 9 emits 700 times more UV radiation on KELT 9B than any other known gas giant. The planet cannot withstand such radiation levels.

“A flood of UV rays may blast more than 10m tonnes of material off the planet every second.”

In 2018, NASA will launch the James Webb Space Telescope. They hope to determine if the planet does have a cometary tail. They also plan on using the Hubble space telescope to learn more about it’s apparent evaporation. Whatever they discover will help us learn more about the mysteries surrounding giant stars and hot massive planets.