In a celestial fireworks display that would rival any Earthly celebration, scientists were able to catch a glimpse of a new galaxy collision lurking just behind the Milky Way.

At just 30 million light-years away and dubbed “Kathyrn’s Wheel” because of its uncanny resemblance to the popular firework display, this newly-formed galaxy has “sparked” the interest of astronomers and scientists alike.

One of the lead astronomers on this project, Professor Quentin Parker at the University of Hong Kong said,

“Not only is this system visually stunning, but it’s close enough to be an ideal target for detailed study. The ring is also quite low in mass — a few thousand million Suns, or less than 1% of the Milky Way — so our discovery shows that collision rings can form around much smaller galaxies than we thought.”

The occurrence of a “bull’s eye” collision is rare. This is when two galaxies of similar mass and size slam together creating shockwaves that compress the reservoirs of gas from each galaxy. This in turn triggers the formation of new stars. The intense heat and speed of the process lights up the celestial heavens in a spewing, flaming, sparkling circular display.

Although, we have learned over the decades this is indeed how galaxies grow, it is extremely difficult and rare to see one in progress. In fact, fewer than 20 systems with complete rings are known of today. 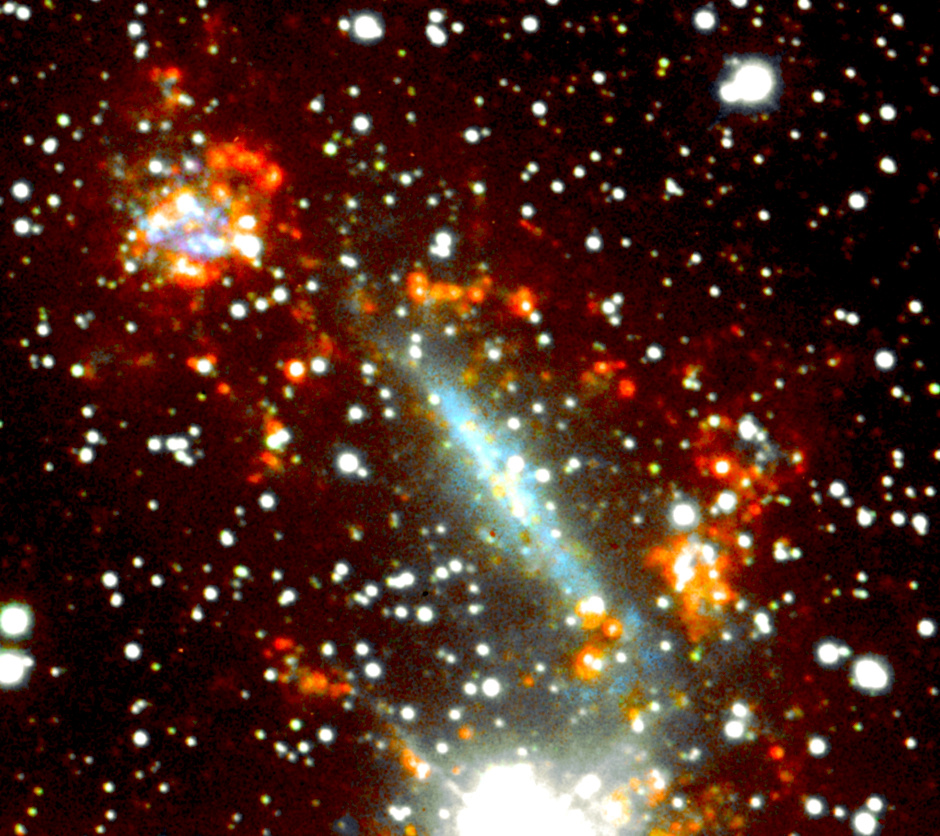 Kathyrn’s Wheel was discovered by the UK Schmidt Telescope in Australia while doing a wide field survey of the Southern Milky Way in search of the remnants of dying stars. The technology uses a narrow wavelength optical region centred on the red “H-Alpha” emission lines of gaseous hydrogen. To the lead scientists delight they happened upon this cosmic ring situated in the constellation of Ara behind the dust and gas of the Milky Way. It is also seven times closer than any other similar phenomena and forty times closer than the famous Cartwheel galaxy. Scientists believe the fact that this ring is situated behind a dense star field and very close the the brightest star in its foreground is most likely why it had not been spotted before.

However, since the discovery of this galaxy, scientists are now questioning their theories since the odds of collision in this relatively empty region of space are extremely low. Perhaps these collisions are more common than we once thought?

Astronomers are currently carrying out further studies with the use of larger telescopes from around the world to discover all the mysteries this galaxy can reveal to a questioning world.