The most recognized space reporter passed away this week. Read on to learn more about Jay Barbee and his 55-year career reporting space news.

Jay Barbee was well known in the space community. After all, he covered all 166 American astronaut flights and moon landings. Barbree is the only journalist to have covered every non-commercial human space mission in the United States. He reported when Alan Shepard, aboard Freedom 7, in 1961, became the first American to go into space. His career continued through to the last mission of the Space Shuttle, Atlantis’s STS-135 mission in July 2011.

Jay Barbree spent his entire career around the space program. He joined the United States Air Force at the age of 16. After serving his country, he became a reporter in Albany, Georgia. His first report centered around witnessing the Sputnik booster orbiting in the sky in 1957. This event launched his career. As a result, Barbree became enthralled with space flight. He spent his own money to travel to Cape Canaveral, Florida, more than once. During the early days of journalism, reporters phoned in their radio report. For example, Jay called in his reports about rocket testing to WALB radio and TV, his Albany, Georgia employer at that time.

In one of his self-paid trips to Cape Canaveral, he witnessed the successful rocket launch of Explorer 1 on January 31, 1958. He then decided to move permanently to the Cape Canaveral area. However, he continued to call in his reports to WALB radio and TV in Albany, Georgia. Florida radio station WEZY hired him a short time later as a traffic reporter. However, he continued to report on the space launches.

During this period, everyone talked about the space program. Reporters excitedly shared new information coming from NASA. People talked about going into space. Hollywood helped keep the enthusiasm going by producing science fiction films. In addition, Americans believed that they needed to conquer space travel before the Russians. This excitement helped Jay get hired as a full-time broadcaster for NBC. The news network clearly understood that space launches, astronauts, and the space race made good news. 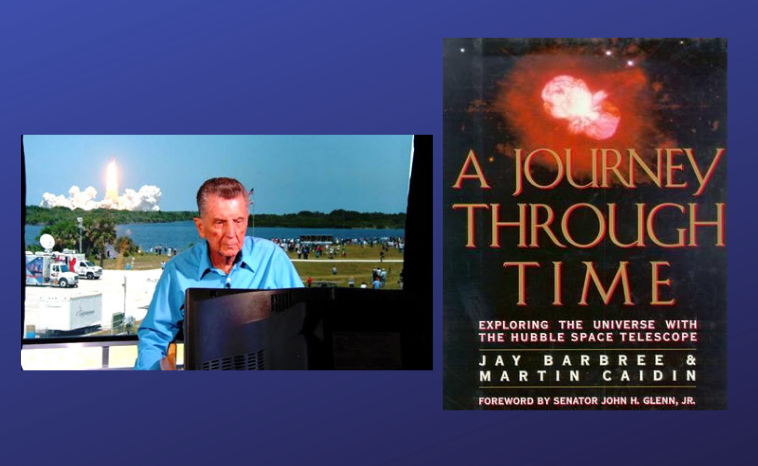 Aside from reporting on space missions, he also co-authored Moon Shot with astronaut Alan Shepard.  He also wrote the following books,

“The Day I Died” is about Jay himself.  In May 1987, he suffered a heart attack. For nearly five minutes, his body lay silently with no heartbeat or breath. Finally, CPR, heart stimulant drugs, and shock treatment brought him back to life. This book covered Jay’s story of his successful battle back from the dead.

One of the most famous stories he is well known for is breaking the news regarding the cause of the 1986 Space Shuttle Challenger explosion. He had sources inside NASA that shared with him that the O-rings on Challenger were faulty. He admitted that he was privy to a lot of information about astronauts and their private lives over the years. Back in those days, astronauts and reporters socialized. However, he never broke confidence and remained professional throughout his career.

Jay Barbree will be missed by many that remember him as a solid space journalist and friend to the space program.

Losing Weight During the Holidays