A binary system located about 10,000 light-yeas from Earth has been recently given the title of “Longest-lasting Stellar Eclipse.”

Known numerically as, TYC 2505-672-1, not only eclipses with its “Sun” every 69 years, but the little world is in almost complete darkness for three and a half years!

Joey Rodriguez, a doctoral student at Vanderbilt University in the US. made this statement;

“It’s the longest duration stellar eclipse and the longest orbit for an eclipsing binary ever found, by far.”

The former holder of this title was Epsilon Aurigae,  which is a giant star that is eclipsed by its companion every 27 years for periods ranging from 640 to 730 days. 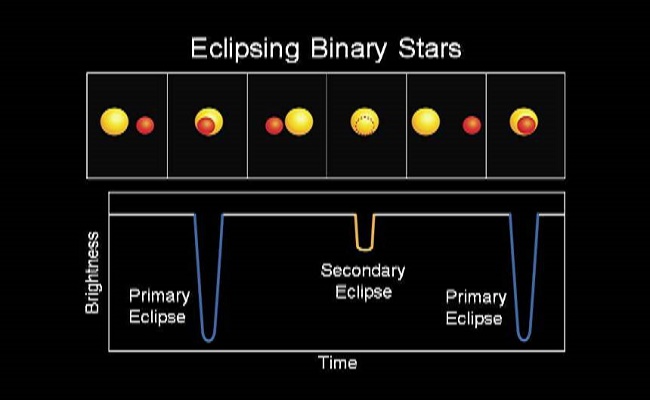 “Epsilon Aurigae is much closer – about 2,200 light years from Earth – and brighter, which has allowed astronomers to study it extensively.”

Unlike other phenomenon’s that play out on their own timescale, astronomers and researchers are excited about this new discovery.  A professor at Vanderbilt, Keivan Stassun, adds this statement to the story;

“Here we have a rare opportunity to study a phenomenon that plays out over many decades and provides a window into the types of environments around stars that could represent planetary building blocks at the very end of a star system’s life.”

TYC 2505-672-1 is different from Epsilon Aurigae because it appears to consist of a pair of red giant stars. One of these seems to be down to its small core and is surrounded by a very large disk of material, which is the reason why it produces the extended eclipse.

“About the only way to get these really long eclipse times is with an extended disk of opaque material. Nothing else is big enough to block out a star for months at a time.”

Albeit a stunning discovery, because of its distance, researchers were only able to extract a limited amount of data from the obtained images. However, they do know the surface temperature of the companion star is about 2,000 degrees Celsius hotter than the surface of the Sun!

The research on TYC 2505-672-1 is just beginning, so who knows what other mysteries are just waiting to be discovered? Until then we can continue to search our own stars to enjoy just a speck of what the universe has to offer.